The Year of Living Biblically

A. J. Jacobs‘ book comes out on October 9th, the same day as Stephen Colbert‘s I Am America (And So Can You!)… That’s either tough competition or *really* entertaining reading for me the following weekend.

Jacobs’ book is called The Year of Living Biblically. 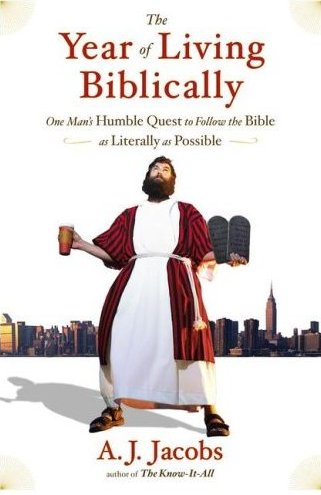 What is it about? Here’s Publishers Weekly:

What would it require for a person to live all the commandments of the Bible for an entire year? That is the question that animates this hilarious, quixotic, thought-provoking memoir from Jacobs… He didn’t just keep the Bible’s better-known moral laws (being honest, tithing to charity and trying to curb his lust), but also the obscure and unfathomable ones: not mixing wool with linen in his clothing; calling the days of the week by their ordinal numbers to avoid voicing the names of pagan gods; trying his hand at a 10-string harp; growing a ZZ Top beard; eating crickets; and paying the babysitter in cash at the end of each work day. (He considered some rules, such as killing magicians, too legally questionable to uphold.)

There are over 700 rules that he follows. Seems a bit over the top? Perhaps, but this is the same guy who, in his last book, tried to read through the entire Encyclopedia Britannica.

Jacobs did an entertaining Newsweek interview as well:

Which is the greater learning tool, the Bible or the encyclopedia?

That’s a tough question. The Bible project was a lot more difficult than the encyclopedia project. The Bible affected every single part of my life, it affected the way I walked, the way I dressed, the way I hugged my wife, the way I ate. The year was the most extreme makeover of my life. In terms of which is the better learning tool, the encyclopedia does contain a lot of biblical passages in the different books, so it might contain most of the Bible in it.

Two kinds of rules were hard. Avoiding sins we commit every day like lying, gossiping and coveting was hard, and then there were the rules that were hard to do in modern life, like stoning adulterers. But I did manage to fulfill that one. What happened was, I was in the park, dressed in my white garb, and this man in his 70s came over and asked what I was doing. I explained I was trying to follow every rule in the Bible as literally as possible, including growing my beard, not mixing fibers, stoning adulterers, and he said, “I’m an adulterer, are you going to stone me?” I said, “Yeah that would be great.” The Bible doesn’t say what size the stones have to be, so I had been carrying around these pebbles in my pocket for just such an occasion. I took the pebbles out of my pocket, and he instantly picked one up and threw it at me, so I decided, an eye for an eye, and I tossed one at him. It did provide an entry for talking to people about capital punishment and the Bible. How could they stone adulterers, what was life like back then, does it apply today. I tried to say to the guy, you shouldn’t sleep with other women, but I don’t know if it sunk in.

(Thanks to Spazeboy for the link!)

September 26, 2007 Heroes
Browse Our Archives
What Are Your Thoughts?leave a comment