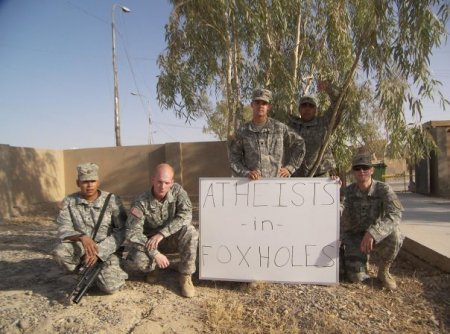 The one in the middle, Jeremy Hall, is joining the Military Religious Freedom Foundation in suing the Department of Defense (here’s a PDF of the lawsuit):

The suit, in U.S. District Court in Kansas City, Kan., alleges that [Maj. Paul] Welborne threatened to file military charges against Hall and to block his reenlistment for trying to hold a meeting of atheists and non-Christians in Iraq.

In naming [Defense Secretary Robert] Gates as a defendant, the lawsuit alleges he permits a culture that sanctions activities by Christian organizations, including providing personnel and equipment. It also says the military permits proselytizing by soldiers, tolerates anti-Semitism and the placing of religious symbols on military equipment, and allows the use of military e-mail accounts to send religious rhetoric.

There’s currently an issue about who/where Welborne is. The lawsuit has now been amended to charge Freddy J. Welborn, not “Paul Welborne.”

Over at The Second Enlightenment, we hear about the response to Hall:

One unfortunate consequence of this is that, according to SPC Chalker, SPC Hall has been receiving death threats, ostensibly from some of his fellow soldiers, and has been assigned a bodyguard because of it (the person behind the camera, accord to SPC Chalker). I guess the theistic asshats making the threats never understood the concept of “brothers in arms,” because this sure isn’t any way to treat a fellow soldier, regardless of what religion he follows (or doesn’t as the case may be).

Why this is an issue baffles me. If the soldiers want to have a meeting for atheists, let them. End of story. This is the military, not church. Do the Christians who are stopping these meetings have nothing better to do in Iraq?

(via The Second Enlightenment. Thanks also to Richard for the links!)