California congressman Pete Stark spoke at Harvard a couple nights ago, his first remarks about his non-belief since the Secular Coalition for America‘s contest. He received the Humanist of the Year award from Harvard’s humanist chaplaincy: 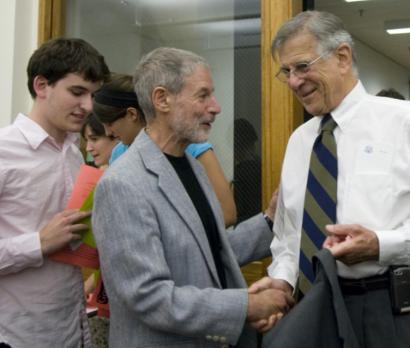 In the picture, Stark (right) shakes the hand of SCA’s president, Herb Silverman.

The Boston Globe has a summary article of the event, where Stark made a number of remarks saying that religion on the Hill was more politics than faith (shocking, I know). He also underestimated how atheists are treated by their religious colleagues:

“I have no evidence that they [nonbelievers] are ‘demonized,’ ” Stark said in response to a questioner who had used that word. “I think there may be a certain arrogance of certainty among some people . . . but I’ve never run across those who have been nasty about it.”

The answer brought one man to the microphone who said that religious people had told him “what their God plans to do with me when I die.”

“That sounds pretty nasty to me,” the man said.

But the 75-year-old Stark reminisced about some Christians in his youth being forbidden from playing cards on Sunday. Such doctrinaire rules have been replaced by a more thoughtful approach today, he said. “I think as we mature . . . you’re going to find people taking a less strident or literal position on religion.”

“Every time you turn around and someone comes up and says, ‘Do you love Jesus?’ [I say] ‘I don’t know, but everything I’ve heard about him is fine,’ ” replied Stark. “We’re all cowards. We all want to get reelected.”

And there are many others in Stark’s non-religious shoes who lack his courage:

A representative of the Secular Coalition for America told Stark that he had interviewed 21 US representatives who said they were nonbelievers but were unwilling to go public with that. “Something is intimidating those people,” he said.

The article correctly suggests that Stark has an advantage coming from a California district that supports his non-theism. Most other US representatives don’t have that good fortune.

But seriously… 21 others! A total of 22 out of 435 congresspeople are not religious! It’s not even close to representing atheists in the general population (between 10-20%, depending on which survey you look at), but it’s a start… and maybe one day we’ll reach a Tipping Point and our elected officials will come out and be honest about what they really (don’t) believe.

September 23, 2007 Atheists' Home Vandalized
Browse Our Archives
What Are Your Thoughts?leave a comment