Who is God’s Lawyer?

Just to prove a point, though. 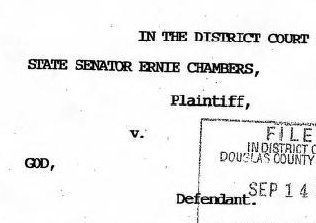 First some background: Chambers is the longest-serving state senator in Nebraska’s history, having first been elected in 1970. He’s also the only African-American in Nebraska’s legislature. Earlier this year, after Pete Stark came out as the first non-theist member of Congress, Chambers followed suit.

According to Wired (why are they my source for political news?):

The suit (.pdf), filed in a Nebraska district court, contends that God, along with his followers of all persuasions, “has made and continues to make terroristic threats of grave harm to innumerable persons.” Those threats are credible given God’s history, Chambers’ complaint says.

Likewise the suit accuses God of having his chroniclers “disseminate in written form, said admissions, throughout the Earth in order to inspire fear, dread, anxiety, terror and uncertainty, in order to coerce obedience to Defendant’s will.”

Chambers filed the suit to make a point that the state constitution allows lawsuits to be filed for any reason, according to WOWT.

God did not immediately respond to a non-denominational prayer for comment by this reporter.

So to recap, why is he suing? To show (in his words) “that anyone can sue anyone including God. It’s an object lesson too. It demonstrates that the mere filing of a lawsuit doesn’t guarantee a win.”

Chambers says senators periodically have offered bills prohibiting the filing of certain types of suits. He says his main objection is the constitution requires that the doors to the courthouse be open to all. Chambers said, “Thus anybody can file a lawsuit against anybody – even God.”

Chambers said he decided to file this lawsuit after a suit was filed in early September in federal court against Lancaster County Judge Jeffre Cheuvront. He’s the judge who was hearing a sexual assault case, where the woman wants to use the words “rape and victim” during her testimony.

There is no God therefor[e] there is no suit. Chambers just wasted some of my hard earned money.

Creighton law professor Mike Fenner says, “It’s a frivolous lawsuit but not one that’s really going to cost anyone much.”

Some religious people will take this out of context. They shouldn’t. Chambers is not attacking God. He’s not doing it because he’s a non-theist. He’s trying to make a point. And because of the nature of the Defendant, I think it works well.

Actually, the lawsuit is hilarious. Read it. It’s short (5 pages, PDF). Here’s a portion from the “Factual Basis of the action” section:

Plaintiff [Chambers], despite reasonable efforts to effectuate personal service upon Defendant (“Come out, come out wherever you are”) has been unable to do so.