The Nonbelievers in Boston Globe Magazine

In today’s Boston Globe Magazine, you can read David Abel‘s cover story on “The Nonbelievers” (you may have to register with the newspaper to read it).

I had a bad feeling about it when I saw the cover… it misrepresents atheists right off the bat with the headline “There is no God” (a phrase atheists do not — at least, should not — use. Rather, we say “we don’t believe in God,” which is very different):

***Update***: The Boston Globe ended up using a different magazine cover than the one I mentioned above. In fact, the actual headline read: “Do You Believe in God?” (Which is perfectly fine.) They had posted the incorrect version of the cover on their website last night, which caused the confusion on my part. The actual cover is show below instead of the one I originally posted: 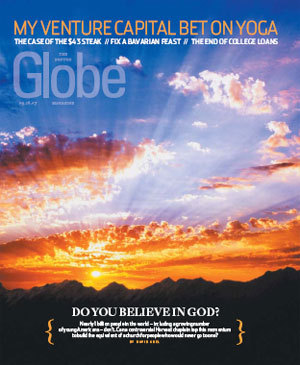 The focus is on Greg Epstein (in picture below), Harvard’s Humanist Chaplain. Though it seems to me like the reporter wanted to write about atheism, used Epstein as the Boston focal point, and exaggerated the “controversy” (see below) which is really just caused by a few very vocal atheists.

Still, the description of Epstein and what he does is very positive:

… after delivering a homily that might have been heard on a Sunday morning, [Epstein] explains the contradictions of his role. “I have a religious personality, without a scintilla of religious belief,” he says. “If it’s an oxymoron to believe that people who have ceased to believe in God still need caring and community, then I’m proud to be a walking oxymoron.” 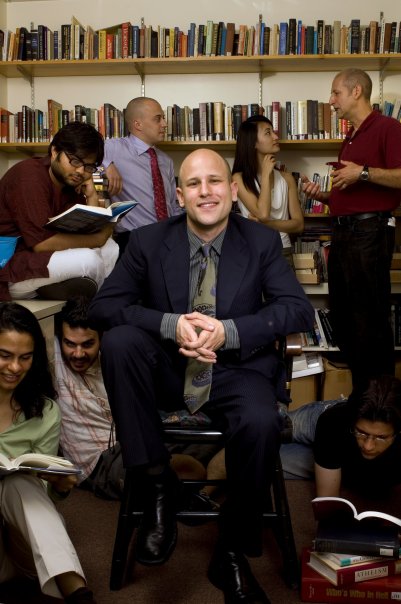 Soon, we turn to the “fundamentalist” controversy:

… unlike other humanists, many of whom argue that acceptance of even moderate views about religion legitimizes religious extremists, Epstein is more ecumenical in his atheism. He has even sparked controversy by criticizing more militant, religion-bashing atheists – in a press release promoting a conference on humanism last spring, his office referred to that group as “fundamentalists.” His goal is to prod nonbelievers to go beyond denouncing religion and denying the existence of God; he wants them to focus on what they value, what unites such a disparate array of people and views. “Life can be lonely, challenging, and we need community,” he says. “We do want to be part of something bigger than ourselves.”

But Epstein’s vision and criticism of fellow atheists has angered some of the very people he wants to unite. R. Joseph Hoffmann, a senior vice president at the Center for Inquiry , argues that Epstein has “abused” his links to Harvard “as a shortcut to the legitimacy he craves.”

In a letter that has made rounds in the blogosphere since last spring, Hoffmann wrote: “If the word spiritual works, they wear it; but if they need to spin things in a secular direction to win friends and influence people, they spin away like sodden spiders. This is Gen-X humanism for the Passionately Confused, and owes almost nothing to philosophy, intellectual commitment, or serious political involvement. It’s about bringing people to the table because eating together is always nice. Family-time, yes?”

The letter added: “What makes Epstein special is his determination to turn his role into that of World Leader of the New Humanism, using the Harvard name as a whip to bring recalcitrant or struggling humanist groups into his new order.”

In response to his critics, Epstein – who speaks softly and has a gentle, rabbinical way about him – says the “fundamentalist” label was misinterpreted but that he has no intention of curtailing his efforts to promote a more communal humanism. “I’m proud to say I want and need to be part of a supportive community. Sadly, this can stir up the emotions of a few atheists who have been wounded by religion and want to distance themselves from it. . . . It’s true that religion has done some terrible, irrational things, but the key question for a humanist isn’t ‘Who am I angry at?’ It’s ‘How can I make this world a better place?’ ”

Of the the bright spots to the piece is that it mentions a wide variety of atheists and atheist organizations.

For example, the Secular Student Alliance gets a shout-out:

Students on college campuses and others have begun to organize nonbelievers. The number of campus groups affiliated with the Secular Student Alliance, for example, has increased by more than 50 percent in the past two years, to more than 80 groups, says August E. Brunsman IV, executive director of the Albany, New York-based alliance.

“We need to get visible and let people know that we’re much more like [believers] than different from them,” Brunsman says. “By banding together under the umbrella of nontheism, we can show the country that we are a sizable part of the population, and we can show closeted nontheists that they are not alone.”

Lori Lipman Brown of the Secular Coalition for America is quoted as well:

Five years ago, to try to change the low opinion many Americans have of atheists (a national Gallup poll this year found more than half of those surveyed would not vote for an atheist for president), a group of four organizations started the Secular Coalition for America. Now, the coalition employs a full-time lobbyist in Washington, regularly issues press releases about everything from stem cell research to religious language used by politicians, and represents eight national organizations with more than 25,000 members, more than a third from the Freedom From Religion Foundation. Lori Lipman Brown, the coalition’s director, acknowledges they have a long way to go in a country where, polls show, two-thirds of the population still believes in God. But the venom she used to hear has faded.

“When I’m on right-wing radio or Christian radio, I no longer hear people say as much that I’m immoral or liable to commit murder,” she says. “Now, it seems, they acknowledge it’s possible that I could be a good person.”

It’s one of the most prominent articles on atheism I’ve ever seen that didn’t focus solely on the bestselling authors. It was about the people who directly affect the atheist “movement” in their own way — and will lead the cause for atheism in the future. Yes, there will be disagreements about which groups/people have the best vision of atheism in the future, but that sort of conversation doesn’t happen unless the Tipping Point for atheism becoming mainstream is fast approaching. More disagreements mean there are more of us out there, who don’t believe in God, and who want to see non-religiosity become commonplace.

As the saying goes, a rising tide lifts all boats. We atheists are all in a better position when articles like these are published.

***Update*** The article is the Most Emailed Story on the Globe’s website today (click below for larger image):

September 16, 2007 Washington Post: Nonbelievers Find Strength in Numbers
Browse Our Archives
What Are Your Thoughts?leave a comment