Sowing the Seeds of Faith by Cutting Down the Neighbors’ Plant September 5, 2007 Guest Contributor

Sowing the Seeds of Faith by Cutting Down the Neighbors’ Plant

It’s late. We had open house for parents at my high school tonight. It was a very long day. I’m exhausted.

But this got me riled up enough to write something…

Russell (an atheist) and Ginny (an agnostic atheist) have lived in their neighborhood for six years. They haven’t spoken to their religious neighbors in about five… until now.

When we first moved in, they were friendly and invited us to church, which we politely declined. We used to host a regular gaming night with our mostly atheist friends. They started asking “Why are there so many cars here on Mondays, and what are all those bumper stickers about?” So my wife told them. And that’s about the time they stopped talking to us. I never felt like it was outright hostility, but she did. In any case, we haven’t had much contact.

The atheist couple also has agave plants on the sidewalk near their driveway, close to the street. Russell adds: “They’re sharp spiky plants, but that’s not so unusual; there are a number of neighbors around the block who have a cactus or two.”

One of those plants was mutilated over the weekend: 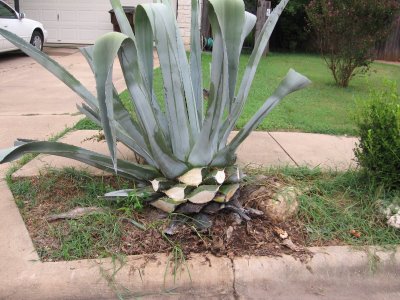 The couple suspected their Christian neighbors were responsible. So Russell went over to their house to ask them about it:

… I had a seat on their couch, they took positions opposite me, and the husband had his arms folded the whole time and a very sullen scowl on his face.

Yes, he cut down the agave. I received a lecture on how dangerous it is to the neighborhood kids, and all sorts of gruesome scenarios about eyes being poked out. But what struck Ginny and me as weird later was when we realized that they hadn’t cut any of the spines facing the sidewalk — only the side on the street. (Again, see the picture.)

I took all this politely and said I understood their concerns, and is there anything else? Then we got into the bumper stickers. The wife said several times that they “make her sick” and she is very angry that we disrespect her religion. That she could never be friends with someone who doesn’t “share her values.” That she is firmly set in her beliefs and would never change them.

Not that anyone asked them to change their beliefs. Even if the bumper stickers are offensive, they’re not personal attacks on the neighbors. And no one is knocking on their door trying to convince them to become atheists.

For the record, though, what did the bumper stickers say?

One sticker says “Freedom From Religion” but you’d think it said “kill kittens” or something equally terrible the way they reacted over it. If it weren’t for people like them, there would be no need for bumper stickers that display a free thinker’s sentiments.

To add insult to injury, the Christians also criticized the “general awful nature of [Russell and Ginny’s] yard.” A yard that is mowed weekly, by the way, and seems to be perfectly fine.

Ginny shares her thoughts on the incident:

It wasn’t an act of kindness or neighborly caring that drove this man to mutilate my poor agave, it was an act of a bigot who holds nothing but disdain for us because we believe differently from him. He is a Christian(the kind that gives Christianity a bad name) and we are atheists. In his mind he has all the justification he needs to break the law by not only trespassing, but to vandalize as well, because we don’t matter as far as he is concerned. He views us as the lowest of the low and we don’t deserve to be treated with respect.

The police were called about the trespassing and vandalism.

… Before I left for work we were visited by a very cheerful and friendly cop, who got to hear all about the history and laughed at the notion that our yard would be an eyesore to anyone.

We didn’t want to file charges. He offered to go over there and talk with them, even give a warning that they could be arrested if they were on our property again. We declined that too. I said I’m still hoping that the husband will come over and work things out amicably.

But I did happen to glance over at the neighbor’s house while the cop car was in our driveway, and I saw the window blinds being pulled up. It was bright outside and I didn’t get to see the expression on her face as she watched us talk to the policeman, clearly discussing our plant. But I have a pretty good imagination and I have to admit, it was kind of satisfying.

Ginny (jokingly) says she is now more tempted to get anti-religious bumper stickers in response.

In all seriousness, she says this:

I think as angry as I am over this, I should turn the other cheek so to speak and show them how nice people behave.

It’s a good move, to show these Christians the type of humanism that they can’t seem to grasp with their religion.

September 4, 2007
This is Worse Than a Flight on Air India
Next Post

September 6, 2007 Cultish Christian College
Browse Our Archives
What Are Your Thoughts?leave a comment