This cracked me up.

Duncan Crary, director of communications for the Institute for Humanist Studies, and Alison Bates, senior campus organizer for the Secular Student Alliance, were featured in Albany, NY’s Times Union newspaper because of their innovative way of getting to work: 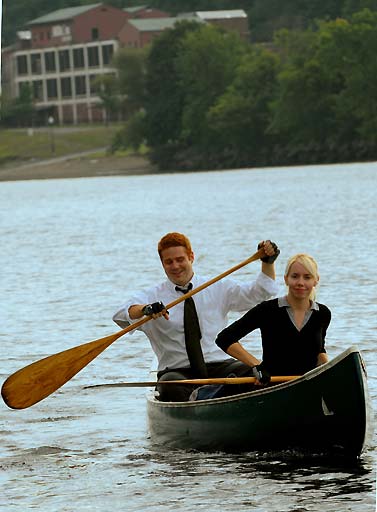 There’s even a special name for what they do:

While most Capital Region commuters are rolling over to hit the snooze button, Crary, with the help of his friend and office mate Alison Bates, drags his 17-foot-long green Tripper canoe out of his backyard, straps a two-wheeled carrier onto the bottom of the boat and starts pulling it toward the river.

They have until 9 a.m. to get to work in downtown Albany and they aim to “canoet” all the way there.

No, that isn’t a typo. Several times this summer, Crary and Bates have commuted from Troy to Albany via canoe. They’ve dubbed it “canoeting.”

Taking a canoe will add more than 2 hours to a regular motorized commute, but Crary and Bates prefer spending hours paddling on the water to cramming themselves into a confined metal box on wheels and jockeying for position on the highway. They do commute by car, especially during bad weather, and they also bicycle.

While the pair both work for progressive outfits, “at the end of the day, the two of us have desk jobs in downtown Albany,” Crary said. For him, spending four hours sitting in a canoe makes those eight hours at the desk a bit more bearable.

“I would be enthusiastic about sky diving into work,” [Bates] said. “And in the winter, I would cross-country ski to work.”

The pair make it into Albany just before 9 a.m. Instead of locking the canoe up by the water, they decide to strap it back onto the carrier and push it up to their Howard Street offices. On the way, they encounter plenty of amused and confused looks. Surely, they are the only ones who came to downtown that morning via the water.

For them, the stiff arms, blistered hands and soggy pant legs are little price to pay to avoid showing up at work already stressed from the rat race.

I’ve said before that it’s not very often you see stories about atheists in the media that don’t involve a lawsuit or anti-religious gripe.

The non-religious aspect of their jobs is simply an afterthought to a really nifty human interest story. It’s not even an issue. Just the way it should be.

September 3, 2007
You Don't Need Religion to be Moral
Next Post