This one isn’t really news like Zac Efron was. Jodie Foster has been an open atheist for some time.

But she is on the cover of the latest Entertainment Weekly (picture via www.icydk.com): 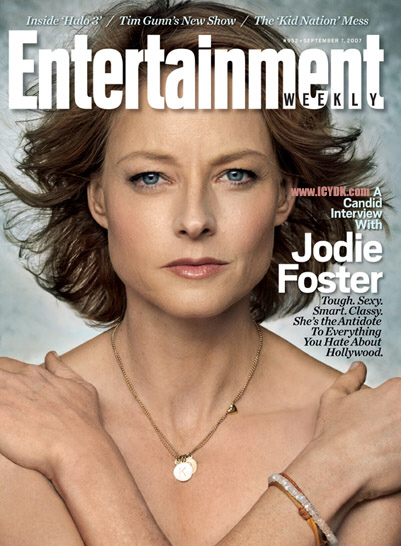 No, I’m an atheist. But I absolutely love religions and the rituals. Even though I don’t believe in God. We celebrate pretty much every religion in our family with the kids. They love it, and when they say, ”Are we Jewish?” or ”Are we Catholic?” I say, ”Well, I’m not, but you can choose when you’re 18. But isn’t this fun that we do seders and the Advent calendar?”

Ok, so it’s not the same answer Richard Dawkins would give. But it’s still good to see someone bluntly saying, “I’m an atheist.”

A fuller (but not-so-updated) list of celebrity atheists can be found here.

(Thanks to Deanna for the link!)

September 3, 2007 You Don't Need Religion to be Moral
Browse Our Archives
What Are Your Thoughts?leave a comment