Queensland artist Priscilla Bracks denied she had deliberately set out to be offensive.

“Absolutely not, no, no. I am not interested in being offensive. I am interested in having a discussion and asking questions about how we think about our world and what we accept and what we don’t accept,” she told ABC radio. 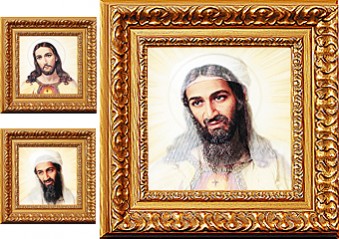 Bracks’ work was in the running for the Blake Prize, Australia’s top religious art award. It was going up against Luke Sullivan‘s “statue of the Virgin Mary wearing an Islamic burqa”:

Neither of them won the award.

In one interview, Bracks said this:

BRENDAN TREMBATH: So it’s a case of a good figure and a bad figure, but how they’re portrayed over time?

PRISCILLA BRACKS: Yeah, exactly. So there’s so many ways you can read that image. You know, immediately, people are seizing on what they see as the most controversial, that I’m comparing the two, but I could actually be saying that it’s a juxtaposition of good and evil, which I see as the base level reading of that work.

But then, on a more sophisticated level, you could perhaps look at how it could be an image which is a cautionary tale, asking the question, do we have to be a little bit more careful about what we focus on in the here and now?

Some Christians were keeping a level head about all this:

The Reverend Rod Pattenden, who awarded the $15,000 prize to the competition winner in Sydney yesterday, said his mission was to spark debate about spirituality in a world that was “cynical, degraded and in crisis”. Mr Pattenden said he did not expect controversy to result from the exhibition at the National Art School Gallery “because the Christian community doesn’t look at art a great deal.”

Everyone else, though, was complaining. Including politicians:

“The choice of such artwork is gratuitously offensive to the religious beliefs of many Australians,” Mr Howard said in News Ltd newspapers.