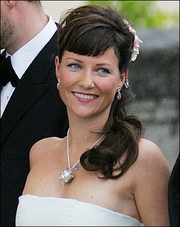 Princess Maertha Louise of Norway just opened a school. Which sounds nice until you hear what it’s for (Emphases mine):

Maertha Louise, who claims she is clairvoyant, says the Astarte school will offer students the chance to get in contact with their angels, described as “forces that surround us and who are a resource and help in all the aspects of our lives.”

And since it’s all pseudoscience, you can bet there’s money involved:

The tuition fees amount to 12,000 kroner per semester (approximately 1,500 euros, 2,100 dollars) and the programme, which involves alternative therapies such as hands-on treatment and healing, lasts for three years.

There is an upside to this. Look at how the Norwegian people react:

Many Norwegians consider the idea wacky, according to media reports.

Newspaper Bergens Tidende has called for Maertha Louise, the daughter of King Harald, to renounce her title, while Swedish author and columnist Jan Guillou urged her to “seek treatment”.

Good to know that there are Norwegians with a sense of sanity.

That’s far better than America, where 75% of the country believes in angels. And it’s better than the 66% of our country that believes God created us in our present form (i.e. screw evolution) within the past 10,000 years.

And when our president “talks to God,” we elect him to a second term.

The princess is fourth in line to the throne, though the article states “she already renounced most of her official duties and title of ‘her royal highness’ after she married Ari Behn, a commoner, in 2002.”