Book Review: Survival of the Sickest by Dr. Sharon Moalem 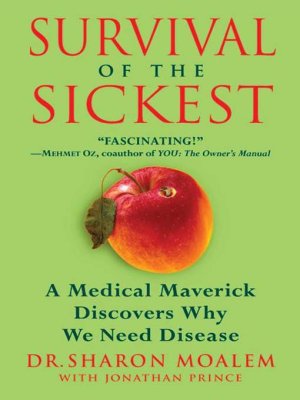 Survival of the Sickest is the biologist’s version of Freakonomics. Which is great if you liked the latter book, as I did.

Dr. Sharon Moalem (with Jonathan Prince) writes about “the miracle of evolution” and answers a number of questions along the way: Why do certain diseases exist? How do they work? Was there ever an advantage to having those disease-causing mutations? What can we do with that information?

Considering the amount of biological and evolutionary concepts in the book, it’s surprisingly easy to read. You feel a whole hell of a lot smarter after you’re done. You’re also eager to seek out more information on other diseases and their evolutionary histories. I won’t analyze the science in the book — I’m no expert — but I will try to summarize its ideas.

Each chapter describes a particular condition (e.g. Hemochromatosis, favism) and the history of it. Moalem poses questions along the way (such as: Why are some people immune to HIV? Why do we age? etc).

If you’ve ever bitten down on a raw habanero pepper, you probably felt like you were being poisoned. And you were. That burning sensation is caused by a chemical called capsaicin. Mammals are sensitive to it because it tickles the nerve fibers that sense pain and heat, but birds aren’t — and that goes to show just how clever old Mother Nature can be when she’s doing the evolution dance…

In the process of explaining these diseases and their effects are seemingly tangential ideas that are actually connected to the ultimate answer of the questions. These tidbits of trivia are fascinating, including a bit on Ted Williams’ cryogenically frozen head and an explanation of Asian flush.

I say the book is easy to read because Moalem strives to make a metaphor out of every concept he talks about, or he connects them to something cultural. Difficult biological concepts become much easier to digest, even if they do become overly simplified.

It’s as if the whole world is engaged in an intricate, multilevel dance, where we’re all partners, sometimes leading, sometimes following, but always affecting one another’s movements — a global, evolutionary Macarena.

Plants are by far the biggest manufacturers of chemical weapons on earth.

In fact, like a casino dealer who never stops, genes can shuffle and reshuffle endlessly to produce a huge array of proteins.

Not every references are useful. Some just get plain annoying:

Four out of five dentists may recommend Trident — but ten out of ten infectious-disease experts will give you the same answer if you ask them to solve that riddle [about a threat to human survival that has a connection to red blood cells]: the answer is malaria.

Still, someone with little or no science background would love this method of explanation.

I mentioned that this book could be compared to Freakonomics. I’m not the first to say that:

If you searched for more connections, you would find them. The point is that with the popularity of Levitt’s book, this was a natural attempt at duplicating its success.

It works on many levels, though there is one key difference between the books. Freakonomics covered a whole range of topics, from the effect of your name to gang hierarchy to cheating. Every chapter was a mini book of its own. Sickest covers one basic topic — disease — and each chapter is one (in-depth) example after another. It gets repetitive after a while.

That’s not to say it gets boring, though. I really enjoyed the book, and I would recommend it. You could read it in a weekend. And you’ll be making references to the book’s ideas in conversation for some time.

(This review was solicited by a publisher; however, the opinions expressed are my own.)