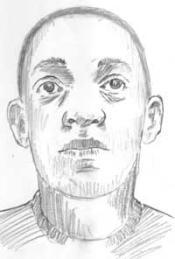 47-year-old Kevin McKeither (above) has been charged with beating and raping a 77-year-old woman (umm… what?) at knife-point.

The attacker ripped her dress, and threatened he would cut her throat if she didn’t do what he told her to do. He pushed her to the ground, stood on her chest and [then] raped her before leaving.

When the woman asked him, “Don’t you have any decency?” he said these words:

You stupid woman, there is no decency. There is no God.

First of all, that sentence makes absolutely no sense.

Secondly, we can’t be sure “there is no God.” Atheists can only say they “don’t believe in God.”

Thirdly, there’s no direct tie between his non-belief in God and his criminal behavior. Though I’m sure we’ll see that connection being made by various people.

Like here. I don’t know if this is parody or serious, but the site writes:

I don’t think it’s too early to declare an atheist crime wave, and unless our city does something to get people out of the Darwin worship centers and into the churches, this cycle of violence will continue.

You know, if every criminal just said “I don’t believe in God” when committing a crime, I wouldn’t be surprised if the bulk of the attention was deflected off of the criminal and onto evil, evil atheism…

July 31, 2007
Is this Preferential Treatment for Muslims?
Next Post