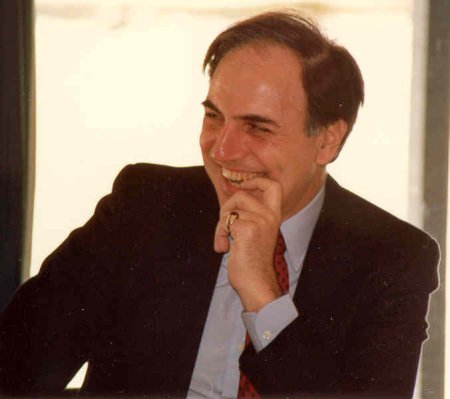 A sad loss for many, many people.

Harvard’s Humanist Chaplain Greg Epstein wrote up a nice piece about him (via email), so I’ll just reprint it here:

It is with profound sadness that I inform you of the death of one of the greatest Humanist leaders of the 20th Century, my beloved friend and teacher Rabbi Sherwin T. Wine, the 2003 American Humanist of the Year. Rabbi Wine and his longtime partner, Richard McMains, were vactioning in Morocco. Returning from dinner Saturday evening July 21 in Essaouira, their taxicab was hit by another driver. Both Rabbi Wine and the taxi driver were killed instantly. Richard survived the collision and currently is hospitalized in stable condition.

For a press release with more detailed information about Wine, dubbed “the atheist rabbi” by Time magazine in 1965, including regarding the memorial service currently being planned, click here or visit the Society for Humanistic Judaism. To hear Rabbi Wine speak on Humanistic Judaism, click here for an interview recorded at Harvard University in April 2007. A video of Rabbi Wine’s stirring speech at Harvard in April 2007 will be available later this week at http://harvardhumanist.org.

In the informal feedback the Humanist Chaplaincy at Harvard has gathered from our conference, “The New Humanism” at Harvard this past April, Sherwin Wine was chosen more than any other presenter as the most outstanding speaker of the weekend-long event; which included such world-famous figures as Salman Rushdie, E.O. Wilson, Amartya Sen, and Steven Pinker. As one younger conference attendee wrote, he was “the surprise speaker who blew me away,” but for those of us fortunate enough to know Sherwin, his excellence came as no surprise. He was not only among the greatest and most knowledgeable orators I have seen, he was also a compassionate and wise leader who showed thousands of people what it means to be good without god. Wine performed thousands of weddings, funerals, bar and bat mitzvahs, and baby-naming ceremonies based not on obedience to or praise of god but on a celebration of the human spirit. He listened at the bedside of sick and dying patients with the same passion, commitment and warmth that drove him to found numerous successful organizations such as the Society for Humanistic Judaism, the International Institute for Secular Humanistic Judaism, and the Humanist Institute.

Around the world, Wine taught that human dignity, courage and love are our most important values, not religious obedience. He publicly debated religious fundamentalists such as Jerry Falwell and Meir Kahane. And he refused the religious veneer that America so values in its leaders– though he kept the title rabbi he did not pray or praise a god he did not believe in.

And yet the movement Sherwin founded and the career he pioneered– creating a new tradition that I am proud to be among those dedicating our lives to carrying on– was never about being against god but rather about moving beyond god to create humanist community, led by humanist professionals, for the benefit of all human beings. If we learn one thing from Rabbi Wine’s loss, let it be this: now that the world’s attention has turned to the 1.1 billion non-religious people on earth, and now that bestselling books on atheism by authors such as Richard Dawkins and Christopher Hitchens have shown millions what Humanists do not believe in, let us follow Sherwin’s example and dedicate ourselves to building a positive alternative to traditional religion. Let us build communities, organizations, and families that do good for ourselves and others, based on the Humanist ethic of reason, compassion and creativity.

Sherwin Wine, like Eleanor Roosevelt, knew that it is better to light a candle than curse the darkness. So in moving forward, let us remember the words he wrote in the moving liturgical song, “Ayfo Oree” (“Where is My Light?”):

Where is my light?

My light is in me.

Where is my hope?

My hope is in me.

Where is my strength?