What Do the KKK and FFRF Have in Common? July 19, 2007 Guest Contributor

What Do the KKK and FFRF Have in Common?

The Galesville Republican, a weekly newspaper in Wisconsin, won’t accept ads from either. 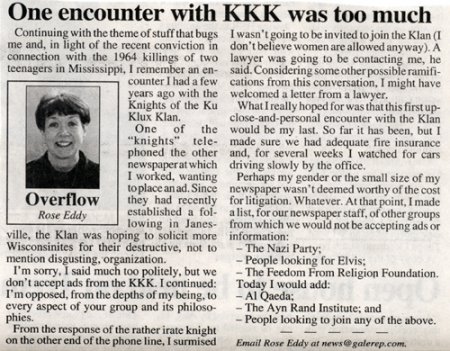 The Freedom From Religion Foundation is lumped into the same league as the Ku Klux Klan, the Nazi Party, and Al-Qaeda.

(And apparently, they all want ads in the Galesville Republican.)

FFRF said this about the piece:

Ms. Eddy apparently does not realize that the Nazi party was Christian to the core, as is the KKK, and that Al-Qaeda also terrorizes in the name of a god–if not her particular brand of deity. If you wish to enlighten this unenlightened editor, her e-mail is: news@galerep.com

Although it’s a given letters from freethinkers will be censored, as always we encourage responses to be polite, succinct, to-the-point and signed both with name and mailing address. (No editors enjoy receiving anonymous or pseudonymous e-mail.)

You can also reach the Galesville Republican at:

July 19, 2007 I Get a D- in Goodness
Browse Our Archives
What Are Your Thoughts?leave a comment