Herman Krieger is “a non-practicing Jew who has not been to synagogue since he was 12.”

He is also the author of Churches Ad Hoc: A Divine Comedy. It’s a photo essay and you can see the contents online.

As Kern Trembath of the University of Notre Dame writes in the foreword:

The first time you read this book, you will know that it is one of those that you will return to again and again in the future. Is it a book of photography? — of art more generally? — of puns? — of religious architecture? — of questionable, comic, and at times tragic religious architecture? The answer, of course, is “yes.” Hence its beguiling nature and consequent beckoning to regular revisitation.

Here are some of my favorite pictures: 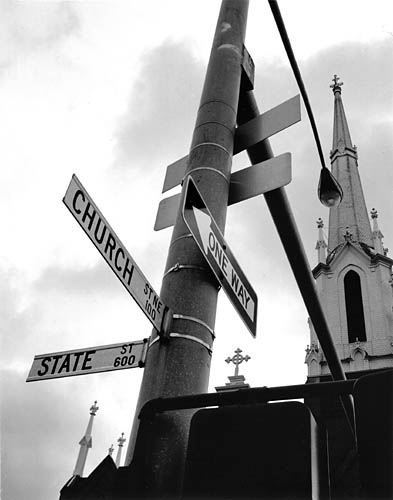 In ADT We Trust 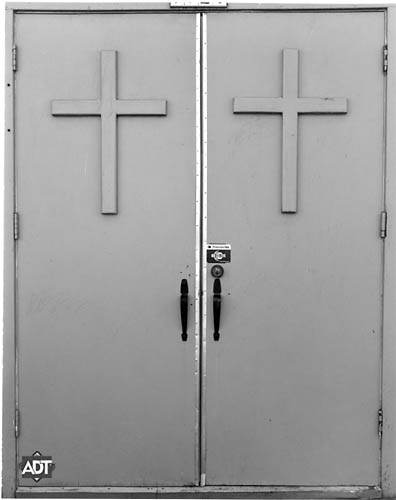 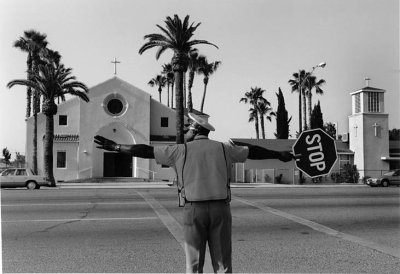 The pictures alone make the book a quick “read” worth checking out.

The captions make it even better.

So go check it out!

I’m not the only fan, either. Krieger writes this in the introduction:

Churches ad hoc was introduced on the Internet in 1996. Since then, references to it have appeared in a large number of Christian, as well as atheist, web sites. Each group seems to find a reflection of their own views in the captioned photographs. Excerpts from the series have appeared in places as diverse as the Internet edition of The New York Times, a Methodist church calendar, a rock band cassette cover, the religion pages of the Stockholm Svenska Dagbladet newspaper, and a Cornell Law School poster for a national conference on The Constitution and Religion: Theory and Practice.

By the way, if someone can please explain the “Auto Da Fe” one, that would be helpful. It has something to do with the name of the car, I think…