A Lesson in When Not to Speak July 14, 2007 Guest Contributor

A Lesson in When Not to Speak 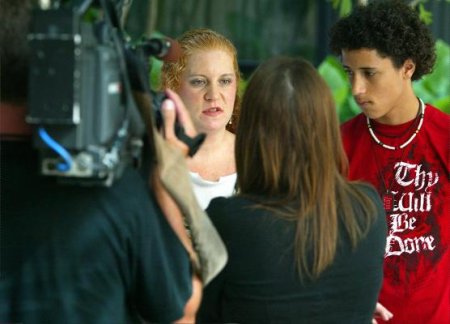 We’ve now heard of yet another lady, Laura Lopez, who tried to ban books from a school library. They never seem to understand that banning books just makes children want to read them even more…

Which books did she want off the shelves?

What?! Opposing viewpoints? A debate on the issues?! How dare they try to educate the children with various perspectives…

Thankfully, the school board denied her request.

Anyway, Lopez is a prime example of a person who should keep her mouth shut. Not because her views shouldn’t be heard. But because she says amazingly idiotic things:

Lopez, in a January letter to Johnson, wrote, “I know that the Constitution says freedom of speech, but what about my freedom as a parent to not want [my children] to read about abortion and homosexuality in their school library.” (Link)

Then tell your three kids not to get those books.

No one is forcing them to read Homobortion: the Novel.

Stop forcing your beliefs on children you don’t control.

“My kids are going to school to learn, not to become a homosexual or an abortion doctor or an atheist,” she said. (Link)

There’s a book that leads children to become abortion doctors?

I like this comment from Brent’s blog: “I flunked out of homosexuality and abortion doctoring, and barely got a passing grade in atheism.” 🙂

And while she doesn’t want her children becoming atheists, something tells me she’d object to removing the Bible from the bookshelves.

You knew that one was coming, right?

“I am going to the American Center for Law and Justice,” she said. (Link)

If you have to rely on them, you know you’re fighting a losing battle.

“My oldest son doesn’t believe in God,” she said. “I guess he kind of thinks I’m stupid.” (Link)

I’m resisting the urge to say, “He’s not the only one.”

But seriously, if you’re trying to strengthen your case, don’t say things like that. It doesn’t make you more endearing to us.

(Thanks to Bjorn for the story!)