Do What With Religion? July 5, 2007 Guest Contributor

Do What With Religion? 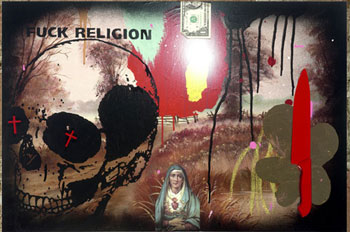 Remember when an American artist got in trouble for Chocolate Jesus?

People in Britain are much more laid back when it comes to art.

Apparently, it’s popular in the town of Brighton:

Seventy-five limited edition prints of Fuck Religion were sold – at £400 each.

$60,366 total for those keeping count. (Of course, there would be three 6s in the number…) And it all sold out in under an hour.

Clearly there is money in fucking religion these days.

Personally, I never understand art, In the painting above, I see a skull with crosses in the eyes… the Virgin Mary… a red knife… half a dollar bill… Would anyone like to explain to me what that all means?

Baldwin is the same guy who painted (the prequel?) Holy Fuck, as seen here: 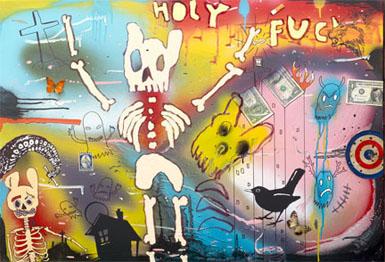 That one also sold out pretty quickly.