The Special Times at the Creation Museum July 3, 2007 Guest Contributor

The Special Times at the Creation Museum 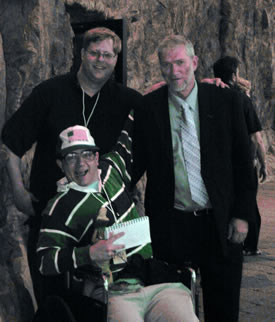 A group of guys from the alternative Buffalo-based newspaper The Beast decided to have a little fun at the Creation Museum.

They created a fake website for “The Special Times” newspaper (which catered to “developmentally disabled people of faith”). This gave them press credentials which in turn gave them special access to Ken Ham.

Oh. And one of the guys acted… well, retarded.

That’s when the fun begins.

Here’s reporter Ian Murphy, who played the role of “Dougie”:

Of course, I had the easy job. My cover was absolutely foolproof, so to speak. I had no tells whatsoever. Even if I felt a laugh coming on, which is normally a big no-no in any risky undercover assignment, I’d just play it up. The more inappropriate my actions, the more believable Dougie became. Besides, questioning a retard’s condition just isn’t done in polite society. “They’re God’s very special miracles,” as I’d told our museum contact.

They eventually get to Ham, the museum’s founder.

Murphy also writes about what’s going on in his head during the video:

The interview was going well. Ham was spouting nonsensical creationist rhetoric, and I was in full-blown retard mode. We were like long lost twins.

At the end of the interview:

“I like Ham!” I roared, giving the bearded Aussie one last bear hug for good measure.

“I talked to Ham!” the exclamation resonated through the entire lobby.

A little later, they make their way through the museum as they try to get the hell out of there:

Bunting upped our pace as we wove among the walking dead, milling like cattle, staring in slack-jawed wonder at Methuselah’s Tent and the Dinosaur Den. “Oooooooh!” I shouted reflexively as we passed Adam and Eve bathing in a waterfall. “YOU CAN ALMOST SEE HER BOOBIES!” Her deliberately-placed hair was an incredible bummer for Dougie.

I’m not actually sure if they accomplished anything by pulling this stunt… though the piece is amusing to read.

Murphy himself seems to agree. He thinks it may not have changed anything, but it was good for a laugh:

Not entirely sure of what we’d accomplished, if anything, the seven hour trip home was euphoric and surreal, punctuated with contagious bouts of uproarious laughter. Ken Ham is certain his museum will undo the damage caused by Charles Darwin and Clarence Darrow; a concrete push of destiny away from the forbidden fruit of knowledge and toward a theocratic vegetable paradise. Are this man and his museum fossilized relics of our subconsciously inclined, mythological leaning past, or a signpost on the highway of history: “Caution: slow people worshiping ahead?” Regardless, a strange sense of optimism pervaded my being as we drifted down the open road. It was America, 2007 the year of our lord, and these were special times indeed.