I Didn’t Know I Had a Choice!

***Update: It’s photoshopped. The ministry put out this press release:

“A photo of our Greenville billboard has recently been doctored by someone and posted on a national website. It is now being distributed around the country. It now reads: “Are you Asian and don’t want to be?” The words above the doctored billboard say that this is a parody. I understand the meaning behind the parody. It is to imply that homosexuals do not choose to be gay any more than do Asians choose to be Asian. To this point I would almost agree. No one chooses to have same-sex attractions. If you will look around our website you will see what I mean. Our ministry is not here to spew hate towards gays and lesbians…quite the opposite. If our ministry angers you, we understand. However, we do not consider you our enemy or adversary. We too were in your shoes. Most all of our staff, mostly all volunteer, were former homosexuals themselves. We overcame our past, through placing our trust and lives in Christ Jesus and following His plan for our lives. We pray that you will do the same one day. We pray for you on a regular basis. We hope that you will not allow this one issue in your life to define–Who You Are.”

As one Digg user noted:

I’m pretty sure he missed the real meaning, it’s not really that Asians don’t choose to be Asian, it’s that there’s nothing wrong with being Asian in the first place. 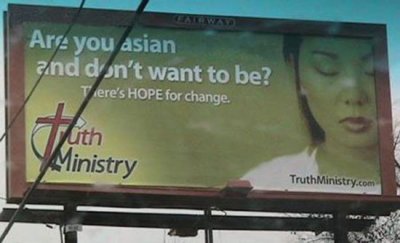 Truth Ministry is best known for supposedly taking the gay out of people.

But I didn’t know they could change my genetics, too.

When they finally de-Indianize someone, though, it will ruin the joke about how first-generation Indian Americans are like Oreos: brown on the outside, white on the inside.

Or maybe the billboard is a subtle form of reverse psychology. Being Asian and being gay are both things you have no control over… so really, Truth Ministry is saying they can’t actually change anyone and we should all be happy with who we are…

Yeah, I don’t buy it either.

June 27, 2007 Rock Against Religion
Browse Our Archives
What Are Your Thoughts?leave a comment