The Bad Kind of Christian Spanking

Unlike the spanking that was discussed the other day, this type is intended to punish your children. 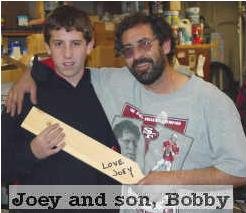 That’s Joey Salvati with his son (who looks absolutely thrilled to be there). Joey has a website called Spare-Rods.com. He basically gives away paddles (you pay for shipping) so you can spank your children.

He decided to do this after showering with God four times.

Wait, it gets better. There is an appointment slip for the child to fill out! 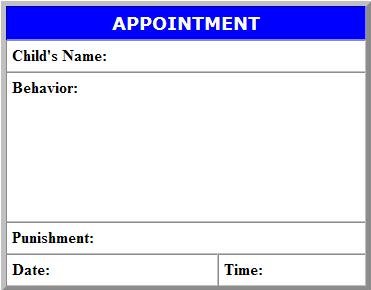 Why the child would need to write down his own name, I don’t know.

Salvati also provides suggested punishment guidelines. Somehow, pushing your little sister in front of a car warrants only two more swats than when you lie about it.

You have to calibrate the paddle, says Salvati.

Before applying paddle to a child you should determine the force of your swing.

There is only one way to measure effectively – swat yourself on the rump and adjust your swing appropriately.

Salvati also says parents should wait one minute between swats. Which I imagine would make for some very awkward 58-second spans.

Best of all, after spanking your child, Give your child a hug and tell them that you love them!.

Now, at first, you might think he’s some random kook. But a TV station in Pittsburgh did a story on him yesterday. The video is also on that page.

The best line from the video came from Salvati explaining what the child would learn from the father:

“He’s not gonna beat you. He’s gonna smack you.”

The reporter from that story expressed his disapproval on his blog, properly placing the blame not on Salvati but on anyone who actually buys and uses the paddle.

(Thanks to Lee for the link!)