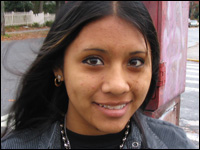 17-year-old Sonia Ponce is the only atheist in her family.

Many atheists share similar stories, but unlike Sonia, we don’t all have twelve religious siblings in addition to our two religious parents.

The link also contains a transcript of the radio story.

We are from Mexico, and we were all raised as Catholics—mom, dad and all 13 kids. I’m the only witchcraft-practicing atheist.

So I’m the weirdo’ in my family—all 14 of them are like geese together flying in a V. I’m the only one going my own way, and I’ve flown on a lot of different paths: vegetarian, agnostic, atheist, witch, wizard, anorexic, bisexual, lesbian, vegan, activist, honors student and head banger! But my parents refuse to hear about it…

Sonia’s sister Beatriz talks about their mother’s reaction when Sonia told her she was an atheist:

She was like oh my God! You believe in the devil! You cannot be an atheist, because I raised you as a Catholic. I baptized you, I gave you communion, your confirmation and you do this to me! How dare you!

Things got pretty bad with the family, and Sonia ended up living with her boyfriend. Her parents essentially disowned her. Sonia was “dead” to them. For six weeks, Sonia didn’t hear from her parents.

… it was kinda’ of weird but I even missed going to church. I didn’t miss the ashy incense smell or the old ladies singing. I missed sitting next to my mom and whispering and poking her face when she falls asleep.

She eventually went back home. Her parents were glad– her mom had been praying for her. Though Sonia says she didn’t come back home because of the prayers. She came home because she missed everyone.

I still believe there is no God, and that evolution made us who we are. But more and more, my parents and I are agreeing to disagree. My mom doesn’t call me a devil worshiper any more, instead she calls me Brujita, little witch. And I’m thinking about getting a tattoo of my mother’s name—Isidra– with a cross and rosary beads in the background. Just to show everybody that I love her, and respect her religion and beliefs.

It’s a touching story of how hard it is for some people to come out as an atheist in a religious family and how much of a negative impact those false stereotypes have.