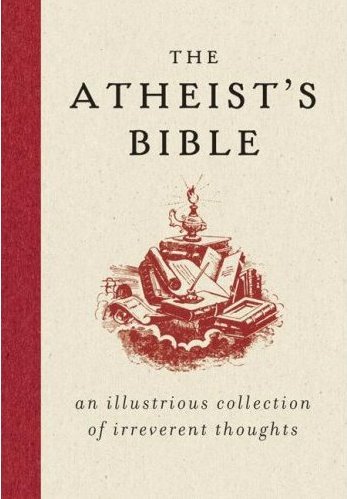 The Atheist’s Bible is a book by Joan Konner, a former dean of the Columbia Graduate School of Journalism.

It’s mostly a collection of quotes and aphorisms that an atheist can enjoy on the beach, on the couch, and on the toilet.

Carlin Romano, book critic for the Philadelphia Inquirer, has a lot of great things to say about this collection, especially when compared to the “heavier” atheist books that are out there:

The Atheist’s Bible organizes hundreds of aphorisms and excerpts to sway an uncertain mind – that is, a mind uncertain about both God’s existence and whether it wants to spend valuable summer time plowing through Dennett, Dawkins or Hitchens.

So consider The Atheist’s Bible your atheism beach book, your big-A graphic novel, your Atheism for Dummies, a slim book that permits you to feel like a high-achieving apostate every 20 seconds while you build up strength for serious blasphemy when cooler weather returns.

Romano also gets a lot of other good lines in the article:

Not a bad dinner party – or reality show. Such secularists expressed many of the atheistic thoughts and arguments we read today, albeit in more elegant prose.

If atheism’s going mass, after all, you need not just a sacred text but an easily portable one.

The Atheist’s Bible… gains its more-than-tchotchke credibility from the authority of its creator – an odd standard to apply to a pro-atheism book, but there you are.

The book just came out last week, so get it while it’s fresh!

June 17, 2007
Freedom Includes Being Free Not to Believe
Next Post

June 17, 2007 Questions Your Pastor Will Hate
Browse Our Archives
What Are Your Thoughts?leave a comment