Article on Parenting Without Religion

The Star Tribune (Minnesota) has an interview with author Dale McGowan of Parenting Beyond Belief.

Dale’s book is a wonderful guide for secular parents who wish to raise their children without religion. He answered questions for this site a couple months ago that give you insight into his wit and wisdom.

Oh, and the article has this kickass photo of “Intimidating-but-cool Dale.” (Why don’t my pictures ever turn out anything like that?) 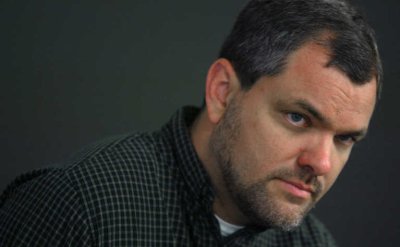 Ironically, the article’s author Pamela Miller uses a quotation from Penn Jillette to capture the book’s theme despite the controversy that surrounded his contribution to the book:

The book’s theme is captured in one sentence from contributor Penn Jillette (of the duo Penn & Teller): “Tell your kids the truth as you see it and let the marketplace of ideas work as they grow up.”

Still, the article’s a good one. And the questions and answers are worth spreading to all atheist parents. Like this one, for example:

Q Religious people sometimes say you can’t have values without religion. What do you say?

A I have never known a parent who had the least trouble explaining why something was right or wrong without turning to religion. Some might say you can’t do that without the Ten Commandments, but then I’ll hear them say to their child, “Don’t hit her! How would you like that if she did that to you?” When it comes to explaining to kids why they should be good, reason works best.

By the way, if you haven’t been reading Dale’s blog, you need to fix that now.

June 16, 2007 Seattle Writers Get Churchified
Browse Our Archives
What Are Your Thoughts?leave a comment