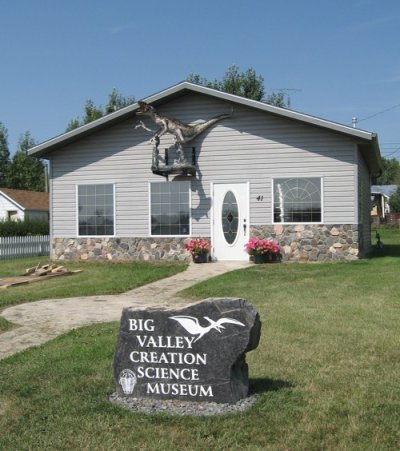 With all the brouhaha over Kentucky’s Creation Museum, let’s not forget that Canada has its own blight on intelligence.

The Big Valley Creation Science Museum opened last Tuesday. But, unlike the Kentucky museum’s opening, no one really cared. It’s almost as if the museum’s owner wished there were protesters:

Owner Harry Nibourg had braced for demonstrators — as was the case when a similar museum opened in the United States — when he opened what he claims is Canada’s first museum dedicated to creationism, or scientific evidence that backs up a literal interpretation of the Bible.

But only a handful of media, visitors and residents milled about as a local politician in the western Canadian province of Alberta cut the ribbon.

So how many people showed up? A couple thousand? A couple hundred?

Harry Nibourg wasn’t sure what to expect when he opened Canada’s first permanent creationist museum to the public yesterday, so he asked volunteers to act as security guards just in case.

But there were no protesters or trouble, only about 20 people eager to see what all the fuss is about these days in Big Valley…

Incidentally, this museum cost $300,000. Most of that money came from Nibourg himself.

As for the politican who cut the ribbon, he was a town council president (a.k.a. reeve):

Earl Marshall, the local reeve, helped cut the museum’s ribbon yesterday, and told reporters he understood how even his presence at the opening could be controversial.

“When I was asked to be here, I was advised that maybe I shouldn’t come, even by Harry himself.”

However, Mr. Marshall said while he’s not a “religious man,” he wanted to support Mr. Nibourg. “I stick up for everybody’s rights … it’s a free nation the last time I looked.”

I understand sticking up for everyone’s rights. But why stick up for ignorance? I doubt the reeve would go to a KKK rally or a Flat-Earth seminar…