The latest Gallup poll on the subject sheds light on how politics and church attendance correlate with thoughts on evolution. 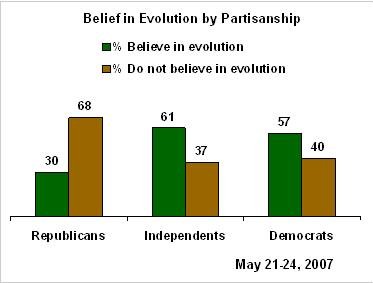 As the Gallup report states:

This suggests that when three Republican presidential candidates at a May debate stated they did not believe in evolution, they were generally in sync with the bulk of the rank-and-file Republicans whose nomination they are seeking to obtain. 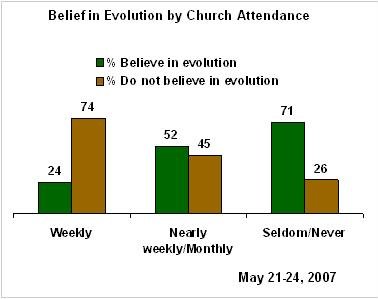 No surprise here, either. Many churches think that science can’t be compatible with faith. Though we need to remember not all churches feel this way and there are pastors who know evolution is correct (even if they may believe God directs it).

The poll also tried to explain how some Americans just get confused by the question. How is it possible to believe in both Creationism and Evolution, as some people stated?

Funniest (or saddest, depending on your perspective) chart you’ll see all day: 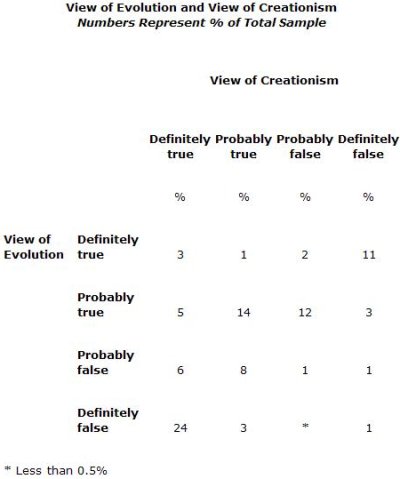 These results show that:

Without further research, it’s not possible to determine the exact thinking process of those who agreed that both the theory of evolution and creationism are true. It may be, however, that some respondents were seeking a way to express their views that evolution may have been initiated by or guided by God, and told the interviewer that they agreed with both evolution and creationism in an effort to express this more complex attitude.

I wonder what that 3% does believe…

A quarter of our country can’t even pick the right answer on a simple two-question exam, so they picked both answers. And sadly, that’s better than the 41% who just got it plain wrong.

How embarrassing for our country.

These people who don’t believe in (or understand) evolution… why do they hold that view? Gallup asked the open-ended question and got these responses:

So 14% of people hold the only response I could at least understand (though not accept) that there is not enough scientific evidence. Almost everyone else gave a reason that had to do with their religious beliefs.

After writing about all this, PZ Myers raises the “abuse” issue:

Maybe it’s about time that we recognize religious miseducation as child abuse.

I wouldn’t go so far as to call all religious education “abuse,” but it’s warranted in this case. To teach a child that evolution is wrong because the child’s family is Christian (or what-have-you) is mental abuse. We wouldn’t accept it in other areas of education; we shouldn’t let it slide in science.