Why Was Turkey at the Bottom of That List? June 10, 2007 Guest Contributor

Why Was Turkey at the Bottom of That List? 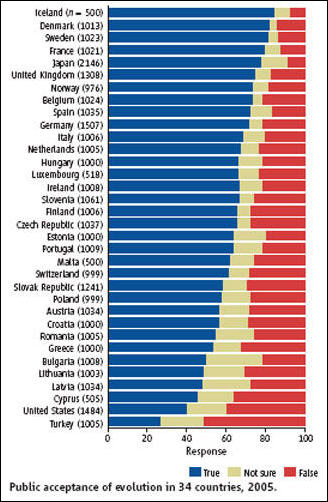 Now we know why Turkey was more ignorant than America.

The Washington Times reports this:

[Yavas’] aim in life is “to cleanse Turkey of the atheist materialism and the immorality Darwin opened the door to.”

Yavas is the “public face” of the Science Research Foundation (BAV). That’s a misnomer if ever there was one… it’s run by college dropout Adnan Oktar. BAV churns out books:

… BAV’s latest publication is “Atlas of Creation,” a 770-page, 13-pound tome the group sent to scientists, journalists and schools in Britain, France, Scandinavia and Turkey in February.

Much of the book resembles Western creationists’ work, which appears to have been brought to Turkey by Western fundamentalist Christian groups in the mid-1980s.

Though details vary, the account of creation in both the Bible and the Koran says God created everything in six days.

In the atlas, page after page juxtaposes photographs of fossils and living species, arguing that the similarities disprove assertions that species adapt over time.

The political message is different, with evolution blamed for communism, Nazism and — under a photograph of the Twin Towers in flames — September 11.

Given that polls show only 1 percent of Turks are atheists, not allowing intelligent design into science textbooks would be tantamount to censorship…

Worst. Argument. Ever. Isn’t that statement implying that Intelligent Design is a strictly religious concept that has nothing to do with science? Not including bad science in a science book is not censorship. It’s the way education works. Just because most people believe in angels, you don’t include their points of view on the matter in a science book.

Creationism proponents are copying Americans in other regards, too. They’re hosting Creationism conferences and building “museums.”

There are some wise opponents to all this nonsense, but they’re in the minority:

Opponents of creationism, meanwhile, also are increasingly taking their arguments to the Turkish public.

A series of scientific conferences have been held in central Anatolian towns during the past few months. One popular science magazine has devoted its past two issues to answering the claims in “Atlas of Creation.”

“These people say science cannot answer all the questions. Fair enough, perhaps, but a science stripped of its basic principles is not science anymore. And without science, modern civilization is impossible.”

Good to know some intelligent people are out there. Can’t wait until the rest of the country catches up.

(Thanks to Becksi for the link)

June 11, 2007 Creationism: The Gathering
Browse Our Archives
What Are Your Thoughts?leave a comment