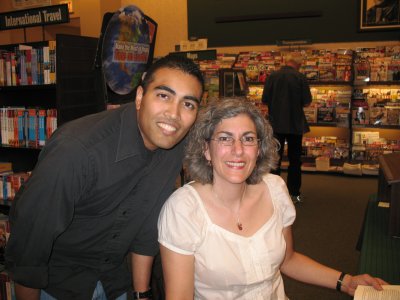 I got to meet Nica, the author of Nothing: Something to Believe In at a book signing tonight. There was a nice sized crowd there, too, which was fun to see.

(*Hemant shakes fists at you*)

By the way, Nica also recently took part in Book Expo America, where she was part of a panel on the “rise of atheism as a religious subcategory in publishing.” Christopher Hitchens and Victor Stenger were also panelists.

She writes about the experience here.

The best part is this line, which got a nice round of laughter from the audience:

I was commenting on the atheist books out there today, and said that some of them weren’t even very — pause and glance at Hitchens — nice. The savvy literati crowd burst into laughter — and Hitchens joined them. For a bunch of grumpy men raging against the machine, I brought them together.

It’s quite the accomplishment making Hitchens laugh, considering that (as Nica mentions in her article) he thinks women aren’t funny.

June 8, 2007 Atheists Have Tripled in the Last Six Months
Browse Our Archives
What Are Your Thoughts?leave a comment