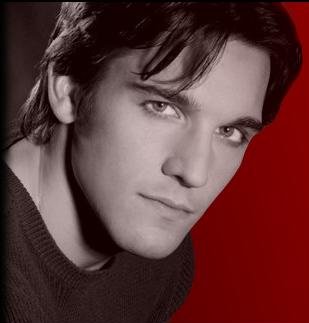 This is almost too good…

The man picked as Adam by a museum based on the Bible’s version of Earth’s history led quite a different life outside the Garden of Eden, flaunting his sexual exploits online and modeling for a line of clothing with an explicit mascot.

Registration records show that Eric Linden, who portrays Adam taking his first breath in a film at the newly opened Creation Museum, owns a graphic Web site called Bedroom Acrobat. He has been pictured there, smiling alongside a drag queen, in a T-shirt brandishing the site’s sexually suggestive logo.

Linden, a graphic designer, model and actor, also sells clothing for SFX International, whose initials appear on clothing to spell “SEX” from afar and serve as an abbreviation for its mascot, who promotes “free love,” “pleasure” and “Thrillz.”

What did the Answers in Genesis spokesman say?

“We are currently investigating the veracity of these serious claims of his participation in projects that don’t align with the biblical standards and moral code upon which the ministry was founded,” Answers for Genesis spokesman Mark Looy said in an e-mail statement.

It makes you wonder what the museum expected when they searched for actors… did they expect to only find actors who hadn’t done non-“Christian” roles in the past? Surely other actors in the museum videos have been involved in projects (not necessarily sexual ones) that didn’t coincide with the museum’s mission.

Linden does make some good comments about the ordeal:

[Linden] said he learned of the opportunity to play Adam through a childhood friend, and has great respect for the founders of the Creation Museum and their vision.

“For the Creation Museum, I did what I did as an actor. It doesn’t necessarily mean I believe in evolution or a believe in creation,” Linden said. “I’m hired to get a point across. On the flip side, if I was hired to play a murderer, that doesn’t mean I’d go out and kill somebody. It’s make-believe.”

Linden said he was selected for the role from a lineup of contenders because his looks were sufficiently generic.

“I’m very proud to be Adam,” he said. “But just because I’m Adam on the screen, that doesn’t mean I’m Adam off the screen. What I do shouldn’t have anything to do with who they think Adam is.”

He’s right on two counts. His acting life should not be forced to reflect his personal life. He should be free to portray anyone, even in the Creation Museum. If he’s good, he’s good.

And he’s also right in calling his portrayal of Adam “make-believe.”

The Creation Museum is overreacting, of course. They pulled the 40-second video in which Linden appears.

June 8, 2007 You Know You're An Atheist When... (PDF)
Browse Our Archives
What Are Your Thoughts?leave a comment