I Almost Feel Bad For Her… June 6, 2007 Guest Contributor

I Almost Feel Bad For Her… 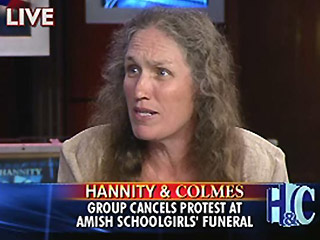 I think I’m on Shirley Phelps-Roper’s side for once… kind of.

Shirley is the daughter of Fred Phelps, whose entire family is known for protesting military funerals because God is punishing our country for “harboring gays and lesbians” (and apparently, the two ideas are connected).

It’s very easy to despise them.

Just like on Tuesday, when they were protesting the funeral of Nebraska Army National Guard Spc. William “Bill” Bailey. He was killed in Iraq when an explosive device hit his vehicle.

But in this recent incident, Phelps-Roper said “she allowed her son Jonah to stand on the flag…”

Here’s what happened after that:

Phelps-Roper was arrested about an hour before Bailey’s funeral when an officer observed the boy stomping on the flag, Bellevue Police Capt. Herb Evers said. She was booked and released after posting $150 bail.

Nebraska’s flag law says: “A person commits the offense of mutilating a flag if such person intentionally casts contempt or ridicule upon a flag by mutilating, defacing, defiling, burning, or trampling upon such flag.”

Technically, what she was doing was illegal according to state law. But it’s a bad law. She does have the Constitutional right to desecrate the flag. Just like she has the right to free speech and assembly, which allows her to protest these funerals. If she wasn’t such a @*#%&, one might actually be sympathetic to her plight.

She was also charged with “disturbing the peace and contributing to the delinquency of a minor.”

She’ll be in court July 11, though she plans to challenge the charges against her.

(Thanks to Logos for the link)