… will be told in detail in Mike Jones’ new book I Had To Say Something: The Art of Ted Haggard’s Fall 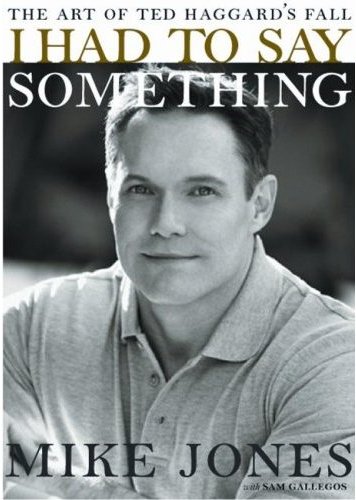 (Did anyone else catch the double meaning in the subtitle?)

For the past few months (a very quick turnaround time), Jones has been working on this book which includes a section on his visit to New Life Church, what exactly happened when he met with Haggard all those times, and the anguish he went through when deciding whether or not to expose Haggard:

Jones said he took four months to decide whether to expose Haggard. A self-described loner, he said he consulted no one, only once telling a friend that an issue involving someone in the clergy was weighing heavily on him.

“It just isn’t my nature to go seek help,” he said.

He said he wrote a list of his options: Do I go to the church? Do I call his wife? Do I call police? Do I blackmail him?

“The last thing I wrote is ‘Do I say nothing?’

Why is that? The Colorado Springs Gazette says this:

The major bookstore chains here — Borders and Barnes & Noble — declined to schedule signings, although each made offers to host Jones elsewhere in the nation.

Jones is not surprised.

“I believe it’s because of the church being down here,” he said. “The part I’m dumbfounded on is when I think of bookstores, they’re supposed to be impartial.

“Listen, that is where it happened. Don’t tell me there’s not community interest down there. Please.”

But that is the explanation given by one of the chains.

“Although the (Colorado Springs) stores will be selling the book, they did not feel that there was enough community interest to support holding a book signing,” said Carolyn Brown, director of corporate communications for Barnes & Noble.

I find that hard to believe…

A slightly better explanation was given by the Borders’ spokesperson:

A Borders spokeswoman said bringing Jones to Colorado Springs “would have opened up a wound just healing. This would have not created a comfortable environment for the author, our customers who live in this community or our staff who also live in the community.”

Then again, it might also help bring closure to a lot of people affected by this scandal.

Maybe it didn’t even have to happen. According to Jones, this book would not have been written had two things occurred:

“If Ted Haggard would have called me and said, ‘Mike, I am so sorry I put you in this very difficult position.’ And the second thing is if he would have apologized to the gay community and said, ‘I am a hypocrite, how dare I actually campaign against you guys when I can’t even abide by my own marriage vows.’ If he would have done those two things, I wouldn’t have written the book.”

The Gazette article also gives us some excerpts from the book. Some disturbing, damn-my-imagination-for-these-images-now-in-my-head, Haggard-esque excerpts. (Emphasis mine.)

“My eyes blinked with disbelief. There was Art on the screen again, less than twelve hours after I last saw him on television. It couldn’t be, I thought. I had to stop and think. This was Daystar, not NBC or another big network. This was religious programming, and apparently Art is an expert on something religious.”

“It was all too much for me to process in one sitting. . . . I thought of my last encounter with Art at my apartment, when he wanted to try out some new sex toys he had just purchased — and do meth. It also occurred to me that he knew my mother had just died and he had not offered to minister to me.”

“My heart started pounding faster. All this time, this man had been coming to me every month to get naked and explore his homosexuality, and now I found out that he was one of the most powerful evangelicals in the world and that he wanted to keep people like me — and people like ‘Art’ — from being treated fairly.”

While we’re thinking disturbing Ted Haggard sex thoughts, here are some excerpts from an interview Jones gave to the Gazette:

Q: Did you omit anything from the books — leave out any anecdotes — in consideration of Ted’s family?

A: Listen, I refuse to feel guilty about that. Ted Haggard is the one that called me to begin with. Some people have already kind of commented: ‘Why did you have to write the sex part? Why did you have to be so explicit — because of hurting his family.’ This is my analogy: It would be like me talking about World War II and not talking about the bombs and people dying. I’m sorry, I just can’t say we had sex and leave it at that. People needed to know what kind of sex we were having. It’s just part of the story.”

Q: What do you think Ted will think if he reads the book?

A: “If he reads the book, he’ll be angry. Because I’m explicit. I tell people what went on. When you come down to it, it was him and me in the room. So there was no witness. He can say I’m a liar and I can say he’s a liar, so it’s going to be ‘he said-he said.’ What do people think we did in three years?”

Did Jones just compare the Ted Haggard scandal to World War II?! He couldn’t think of a more apt metaphor? In the words of Sarah Vowell, this is a guy who can’t “tell the difference between a paper cut and a decapitation.”