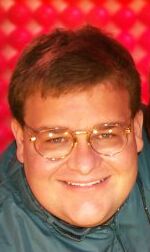 The message has been spreading through the national organizations today… Anyone who has been to an atheist convention in the past few years most likely had a conversation with him or heard him give an interesting talk on “atheism in the media.” He was an expert in pop culture and was always excited to talk about what was going on in the atheist world. He even led atheist trivia games (with sound effects) that always entertained crowds.

There are so many good memories I had with him that it’s hard to mention any handful of them in particular.

But when the “eBay Atheist” hoopla happened last year, he was one of the biggest supporters I had. He might have been more excited about The Wall Street Journal article than I was.

I was reading through the bio he had submitted when he was a board member of the Secular Student Alliance. It was, not surprisingly, very impressive:

Clark is founder and president of the Las Vegas Freethought Society. Clark is past president of Halvason, the Humanist Association of Las Vegas and Southern Nevada. This active organization was awarded AHA’s 2002 Chapter of the Year. Clark has participated in the meetings of the Coalition for the Community of Reason. The CCR is a summit meeting for leaders of US based national freethought organizations. Clark is one of the founders of the Secular Coalition for America – www.secular.org, a 501(c) (4) lobbying organization for the rights of nonbelievers. Clark has been the primary organizer and emcee of the annual July gathering at Lake Hypatia, the largest annual godless gathering in the Southeast. Clark has been published in Freethought Today, and various freethought and humanist newsletters. Listed in Who’s Who in Hell, Clark has spoken at two Atheist Alliance conventions, two Secular Student Alliance conventions, at Lake Hypatia several times and to various local freethought and humanist organizations. Clark is listed in various quote lists and quote books with his quote, “If atheism is a religion, then health is a disease.”

The same bio humorously went on to say that Clark was “a commercial real estate appraiser by day who… [had] appraised a church and an adult bookstore in the same week.”

I’m not sure what his family is planning just yet, but there are a lot of people who will dearly miss him.

May 23, 2007
Jim's Speech at the University of Washington
Next Post

May 25, 2007 In Columbus
Browse Our Archives
What Are Your Thoughts?leave a comment