On Thursday evening, I spoke at Cal State Long Beach about the eBay auction and book. The event went well and besides meeting some wonderful Southern California student atheists, I also got to meet frequent commenter on this site Richard Wade! Thanks to all who came and for the students at CSLB (Hi Sean and Matt!) for putting it together.

Here’s a picture with some of the audience members, including Christians and the secular students from Cal State Long Beach and UCLA: 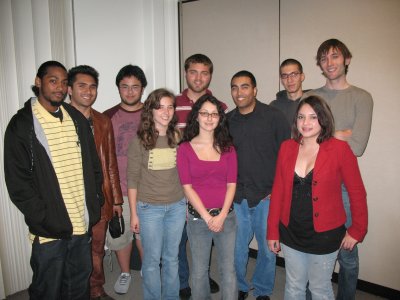 There was also a nice piece about the event in the student newspaper, the Daily 49er.

One interesting story: I had spoken at one point about how the evangelical Christians who come up to you on the streets are more annoying than friendly. You don’t want to have a dialogue with them; you just want to get away from them and continue whatever it is you were doing.

After the lecture, a guy named Juleon came up to me and told me he was a Christian. Yet, he had similar experiences when it came to Street Christians. They were often frustrated that he already believed in Christ. The conversations, he said, went something like this:

Street Christian: Are you saved?

Street Christian: [Annoyed] Well, since when?

As if being “saved” several years back didn’t count.