While we’re talking about new blogs, here’s one by Professor Stephen D. Solomon of New York University. Solomon went to Georgetown University for law school and has a new book coming out late next month: 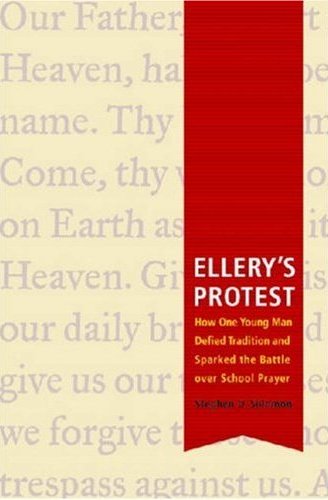 Ellery’s Protest: How One Young Man Defied Tradition and Sparked the Battle over School Prayer

is about Ellery Schempp. If the name isn’t familiar to you, here’s a brief description of who Ellery is:

On November 26, 1956, Ellery Schempp protested mandatory Bible reading and recitation of the Lord’s Prayer at Abington (Pa.) Senior High School by reading silently from the Koran. After he was thrown out of class, Ellery sued the school district. In 1963, the U.S. Supreme Court ruled in Abington School District v. Schempp that devotional exercises in the public schools violated the First Amendment guarantee against the establishment of religion

Ellery is one of the main reasons mandatory school prayer was abolished. He’s a hero for any young atheist out there. Not only for his courageous actions in 1956, but also because he is just a really nice, humble guy.

You can read a moving personal story Ellery wrote about his Supreme Court experience in a past issue of the Secular Student Alliance eNewsletter.

April 16, 2007 Harvard Radio
Browse Our Archives
What Are Your Thoughts?leave a comment