Here’s a research summary excerpt you won’t be seeing in the United States anytime soon:

Two thirds of UK adults (66%) or 32.2 million people have no connection with church at present (nor with another religion). These people are evenly divided between those who have been in the past but have since left (16 million) and those who have never been in their lives (16.2 million). This secular majority presents a major challenge to churches. Most of them – 29.3 million – are unreceptive and closed to attending church; churchgoing is simply not on their agenda.

Two thirds! My math skills tell me that’s more than the approximately 10% of non-religious people in America. This chart below also gives you some hope for the future: 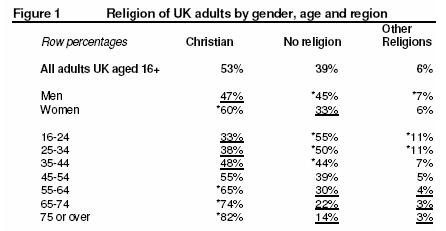 I love my age bracket.

The Labour Humanist has more on this study!