It’s not easy being a traditionalist conservative. First, you assert that your views about gays and women are timeless truths. Then, you change them.

According to the report (PDF), conservative values are falling by the wayside.

Keeping in mind the value of good graphs and charts, here’s what the survey tells us:

Those who claim to be atheist, agnostic, or of no religion rose from 7% to 11% of the Democrats from 1987-2007. In that same span, the non-religious group nearly doubled for the Independents from 9% to 17%. 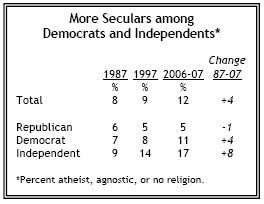 We are all becoming less conservative when it comes to issues like homosexuality and women’s rights, Republicans included. In fact, as Harold points out, “the average Republican is now more tolerant of gays and of women in what the pollsters call ‘non-traditional’ roles than the average Democrat was in 1987.” 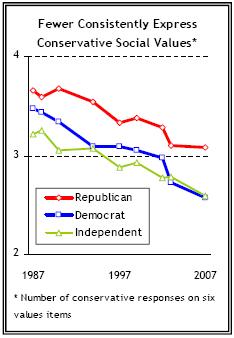 And thankfully, each generation is less conservative than the previous one: 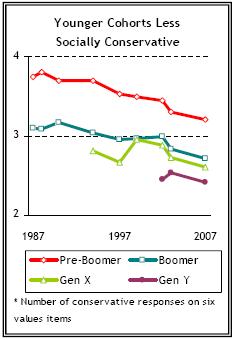 I love Generation Next.

There are also some good numbers on the decline of people who think AIDS is God’s punishment for immoral sexual behavior.

The full report is here (PDF).