Teaching the Bible in Public School 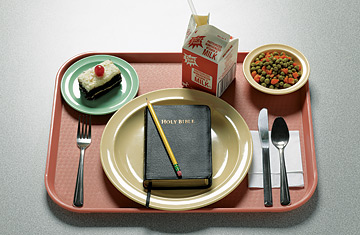 Just a heads-up. The cover story in tomorrow’s issue of Time magazine is: Why We Should Teach the Bible in Public School.

The class has its share of conservative Christians. Front-row center sat Rachel Williams, 18, whose mother does teach Sunday school at Oakwood. But not 20 ft. away sat a blond atheist who asked that her name not be used because she hasn’t outed herself to her parents. Why take a Bible class? I asked her. “Some of my friends are Christian,” she said, shrugging, “and they would argue about, like, whether you can be a Christian and believe in evolution, and I’m like, Okaaaay … clueless.”

I don’t know if clueless regards to her not knowing anything about the debate, or clueless meaning Christianity and evolution are incompatible…

They do quote an atheist who will use her name, though, and a smart one at that:

First Amendment sentinels like Wendy Kaminer, a lawyer and the author of Sleeping with Extra-Terrestrials: The Rise of Irrationalism and the Perils of Piety, fear that given America’s overwhelmingly Christian cast, even neutral Bible instruction would amount to preferencing. “If you teach the Bible outside of close conjunction with other religions,” she says, “then it becomes a kind of promotion of the majority faith. It becomes too hard for most folks to draw the line between teaching and preaching.”

Americans United for Separation of Church and State also gets some space in the article:

Some secularists are worried about who will teach the literacy classes. Joe Conn and Rob Boston of Americans United for the Separation of Church and State have expressed a concern about how teachers willing to give the Bible secular treatment would be found, particularly in states where vast majorities are evangelical. They note that [Chuck] Stetson’s history sections are almost exclusively positive. “A textbook should offer objective study about both the positive and negative uses of the Bible,” Conn writes. “Where is the analysis of the role of the Bible in the Inquisition or the Salem witch trials?” They specifically question the tone of a final section, “Freedom and Faith in America,” which omits the high court’s school-secularization rulings and ends on a truly odd note: a Chinese social scientist attributing the “pre-eminence of the West” to the fact that the “heart of your culture is … your Christianity.” Unlike most of the book, this seems written by Stetson the true believer who took Colson’s Centurion program.

Honestly, if the class is taught the way it’s supposed to be– from a secular point of view– I hope atheists enroll in it. It’s an opportunity to learn about the Bible, and no atheist should lack that knowledge. And it’s nice to have someone keeping an eye out on the teacher to make sure Christianity isn’t promoted.

March 23, 2007 Free Hugs from Atheists Follow-Up
Browse Our Archives
What Are Your Thoughts?leave a comment