My family is visiting Arizona for a few days, so blogging will be slow until I get back.

But while I’m here, I’ll check out the Grand Canyon and see what all the fuss is about 🙂

I don’t travel very often with my Jain parents, but since I started going to more atheist conferences/events a couple years ago, they’ve tried to at least see things from my perspective. They are starting to learn a bit about atheism, but they know very little about Christianity or Catholicism. So if they ever come across anything religious, they’ll let me know.

For example, on the shuttle at the airport, I happened to sit next to a guy wearing a black shirt (with black collar) and a white square by the neck– obviously, a priest.

My parents began to point him out to me. In a very un-subtle way. (Because, of course, I’ve never seen a priest before and I’ll be amused by the sight of one…)

Parents: Look!
Me: What?
Parents: Next to you!
Me: [Looks around] I don’t see anything.
Parents: [Make gestures towards their shirts.]
Me: I have no idea what you’re doing right now.
Parents: HIS SHIRT! LOOK AT HIS SHIRT!!!! NEXT TO YOU!!!
Priest: [Turns in my direction… glares.]
Me: I want to go home now.

Like when we left the airport and were on the road and they woke me up to point out a bus in front of us: 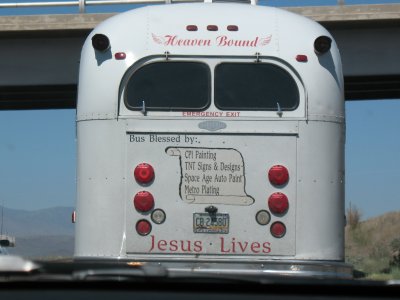 March 18, 2007 Article on an Austin Atheist
Browse Our Archives
What Are Your Thoughts?leave a comment