WSET (The local ABC affiliate) did a story on the Blasphemy Challenge and the response given from a professor at Jerry Falwell’s Liberty University. More on that in a sec. If you want to watch the segment, click here, then click on “Watch the eVideo.” 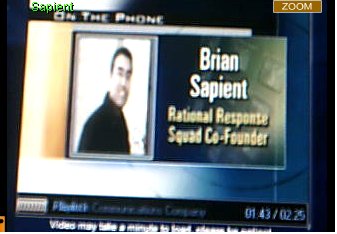 In case you can’t tell, that’s not Sapient… Unless Sapient suddenly became browner and changed his name to Hemant. (See the banner picture at the top of this site.)

So at this point, I’m *really* trusting this news segment. Then they say that the professor is coming to Sapient’s studios and Sapient may be going to Liberty University.

Of course, all of that is also incorrect.

On February 7, in front of 4,000 students in the Campus Church, Dr. Ergun Caner of Liberty University told the Blasphemy Challenge folks to bring it on.

“…to any one of you [atheists], I say, ‘bring it,’ because I believe that by using rational, coherent rules of logic and law that the God who created those rules of law will manifest himself.”

Liberty University even issued a press release about it. The release ends in this line:

The Rational Response Squad has yet to comment on Caner’s challenge.

Because Caner never actually asked them. He simply made the proclamation in front of everyone except the people he was challenging.

And so the Rational Response Squad was deluged with emails from Liberty students asking why they weren’t accepting this challenge. This challenge that they had never even heard about. (For some reason, the RRS doesn’t keep up with the press releases from Liberty University.)

However, once they figured out what was happening, the RRS did issue a response.

They’re not planning on going to Liberty (it wouldn’t be neutral ground, they say). But they are proposing steps towards a live, broadcast audio interview. No one would be traveling, but it would be an agreeable arrangement for both sides.

While you’re at that site, you may notice an interesting email RRS received from a Liberty student. The student says:

Trust me; the man [Caner] is not able to beat you in an argument… I was greatly looking forward to you making a fool out of the students’ idol.

In regards to the live audiocast, Caner has begun talks with the RRS about making it happen. Logistics are being worked out.

February 12, 2007
Creationist Gets Doctoral Degree in Geosciences
Next Post