The editors of the Philadelphia Weekly, the city’s alternative newspaper, came out with its 2007 list of “Who We ♥.”

And topping their list was Margaret Downey, president of Atheist Alliance International! 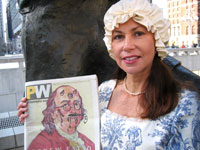 Here’s the writeup (apparently, the PW doesn’t like paragraphs):

Who’s that woman dressed in Colonial clobber clattering around City Hall? It’s godless she-devil Margaret Downey, the woman who once sued the Boy Scouts of America for discriminating against atheists during her crusade to win rabble-rousing Philadelphian revolutionary Thomas Paine the recognition he deserves. Wait, crusade is totally the wrong word. When Downey was 4, she tore the head off her talking doll to learn how it worked. Nowadays she regularly but (alas) only metaphorically tears the head off the freedom-hating, truth-despising, woman-loathing Christian Taliban scumbags who want to turn this country into Afghanistan with strip malls. Flirtatious, saucy and never less than impeccably dressed, Downey is an atheist/feminist/antiracist/author/publisher/writer and all-around super-righteous wonder woman. Visit any culture-war battlefield, and you’ll find her on the right side of the barricades, glammed up to the nines, taking chauvinist names and kicking bigot ass. Atheist; freethinker; defender of the Constitution; free-speech activist; president of Atheists [sic] Alliance International; founder of the Freethought Society of Greater Philadelphia, the Anti-Discrimination Support Network and the Thomas Paine Memorial Committee; board member of the Freedom From Religion Foundation, the Humanist Institute and the Thomas Paine National Historical Association; advisory board member of the Robert Green Ingersoll Museum and the Atheist Alliance. Phew. Is that enough? Are you in love with Margaret Downey as much as I am? You should be. She’s the best of us.

Hell, a picture of me with Margaret is the desktop background on my computer.

And I must say, even as a non-Philadephian, I think she’s much more deserving of the accolade than All Television News Traffic Reporters.

February 10, 2007 Darwin Celebrations
Browse Our Archives
What Are Your Thoughts?leave a comment