Interview with Dale McGowan, author of Parenting Beyond Belief

. But in his new role as editor, he may be putting together his most fascinating work.

. The release date is currently set for April 30, 2007, but you can pre-order the book now

These essays are written by Richard Dawkins, Julia Sweeney, Penn Jillette, Mark Twain, and several others from all walks of life. The foreword is written by author Michael Shermer, publisher of Skeptic Magazine.

In fact, let’s do a quick Rorschach test with the cover. Tell me what you see: 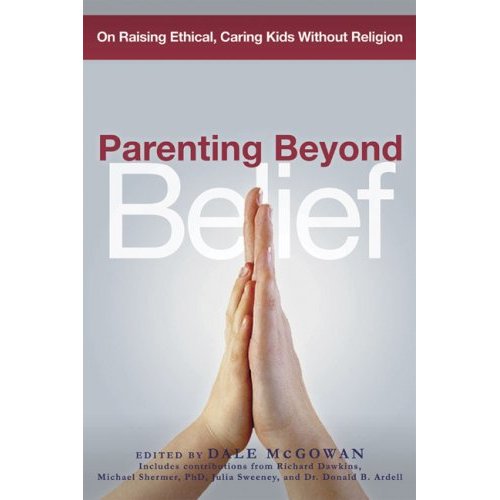 Did you say praying hands?

Here’s Dale talking about the cover:

After a moment looking at the cover, our perception tends to shift. We realize they can’t really be praying hands after all—we’re seeing the hands of two different people, an adult and a child. But the influence of religion is so strong that many of us will still see only prayer. A more fitting idea might be this: when we move beyond belief, we turn not to a god but to each other, with mystery and meaning undiminished. The image also celebrates the parent-child bond—some even see it as a parent-child “high five”! This rich and multifaceted image, like the book itself, challenges us to see possibilities beyond the religious.

If you go to the book’s website, you can also download a study guide that would work well for any further discussion.

I can’t wait to read this. Dale’s a fantastic writer and a great guy. (Funny, too. Just read his responses below.) I’m sure the essays he included are just as thought-provoking as his own writing. He was nice enough to take some time to answer a few of my questions.

If you have any follow-up questions, feel free to make them in the comments and I’ll pass them along to Dale:

Hemant Mehta: Were you raised with or without religion? How did it impact your childhood?

Dale McGowan: I was raised in what is surely the most common religious environment in the US: the nominally Christian home. We attended a UCC church and my brothers and I received the general message from our folks that religion is a good thing. I didn’t wonder about religious questions too much during my early years—but fortunately doubt was not specifically stigmatized and learning was prized, so when the window did open up, I was able to think clearly.

My dad died when I was thirteen, and boom—I was full of questions. I read the entire Bible in a year—holy crap, have you read that thing? (Sorry, sorry, I digress)—found it indistinguishable from the Greek and Roman myths I loved and began to ask a more interesting question—why do other people believe this? A more orthodox upbringing could have prevented that question entirely.

HM: What are the challenges faced by parents trying to raise their children without religion?

DM: Top five:
(1) Helping children to be freethinkers in a world that stigmatizes and fears religious doubt.
(2) Teaching empathy for those who have not found their way out of religious mythology. This is made especially difficult because so many of us fail in that empathy.
(3) Being honest about our own opinions and values without indoctrinating our kids.
(4) The relative lack of infrastructure and resources for secular families.
(5) The eventual plunging of my soul into a lake of fire.

Many people assume that the topic of death must be an enormous challenge for secular parents. I expected it to be, and it’s just not the case, at least for us. The end of life is a common source of questions and wonder for my kids. We talk about it as if we were talking about digestion or planetary motion—as if it were a fascinating fact of life, which it is. Present something as a normal and appropriate thing to ponder and kids—those resilient little creatures—will accept it as normal and appropriate to ponder.

HM: What do the contributors to the book say regarding aspects of childhood such as belief in Santa Claus and the Tooth Fairy?

DM: We model freethought values by presenting two contrasting opinions on the Santa myth. In his essay “Put the Claus Away,” Tom Flynn strongly opposes the Santa story, suggesting that it is a lie, teaches kids to be gullible, promotes fear and acquisitiveness, and actually prepares kids for religious belief. I wrote a counterpoint suggesting that the Santa myth—and its ultimate debunking—constitutes the greatest possible dry run for debunking religious mythologies. “Our culture has constructed a silly and temporary myth parallel to its silly and permanent one,” and the one with an expiration date in mid-childhood can prepare us for the other.

I’m not sure what you mean about the Tooth Fairy. What are you implying?

HM: Are there any statements in the book you strongly disagree with?

DM: Not strongly, no. Oh, Penn Jillette takes a Libertarian shot at public schools, and I’m a big supporter. And Tom Flynn is of course COMPLETELY off-base about Santa. There are also a number of things I’d have said differently, but all in all, I’m astonished that we ended up with a relative consensus. I mean, think about it—thirty atheists!

HM: What are you hoping the reaction will be to this book?

DM: I’m praying for James Dobson to publicly excoriate it. It’s all I want for Christmas.

Short of that, I’m hoping that we can finally uncork our biggest cultural secret: that fully one in three Americans is a religious doubter. By giving parents (of all people) permission to be out of the closet as nonbelievers, we can pave the way for a future in which religious doubt is no big deal.

I’m also expecting a lot of hallelujahs from the closeted middle. Even if the book was nothing but secular nursery rhymes (“Mary Had a Little Doubt,” etc), the mere existence of a book that says ‘Raising kids without religion is a perfectly acceptable thing to do’ can give previously unsupported, unidentified nonbelievers the strength to do it.

HM: Do you have any regrets regarding your own kids’ non-religious upbringing?

DM: None at all. The advantages are too huge. We get into all sorts of fascinating wonderings at the dinner table about life and death and meaning and purpose and the universe and morality and truth and fiction, wonderings that would either be prohibited in religious homes or (even worse) shut down with answers like, “God. It’s God. Now eat your beans.”

Think of all the things we just accept that are actually unimaginably strange. My kids emerged from my wife. I saw it. And they are half me and half her. We are standing on a ball that is spinning at 900 miles an hour. We are starstuff that knows it exists. We are related to redwoods and sponges. Freethought parenting actually allows these realizations to take root. The thrill of seeing new minds working their way out into our incredible universe without the millstone of religious nonsense makes any possible regret fade rather quickly.

HM: What is the best advice you can give to parents raising their children without religion?

DM: (1) Relax! Religion often teaches that a very thin thread separates us from catastrophe. Whether confession or church attendance or avoidance of certain thoughts or actions, a long list of gotta-dos and never-dos keeps many believers in a constant state of orange alert. In the absence of all that nonsense, freethinkers can relax.
(2) Recognize that moral development is an understandable process, and that kids can be consciously involved in their own moral development.
(3) Don’t be afraid of religion. Expose your kids to it as an influential cultural artifact. We too often worry that our children will be seduced by religion if we don’t actively fend it off. More nonsense! As Penn puts it, you don’t have to teach disbelief to kids. Simply releasing them from the fear and ignorance of indoctrination is gift enough. Let them take it from there.
(4) Humans need wonder. Fortunately, the wonder inherent in a scientific worldview utterly trumps the religious imagination.
(5) Never treat death as an untouchable subject. Touch it all over. The more familiar, the less frightening. It’s a lifelong challenge, but they’ll be all the further along if they don’t have to waste time erasing heaven (and hell) from their conceptual maps.
(6) Encourage empathy for religious believers. Discourage arrogance.
(7) Model honesty and self-worth by being happily and graciously “out” about your disbelief.
(8) Know, really know, that you are not remotely alone.

HM: Do you have any favorite essays in the book?

DM: No, I love them all equally. Oh wait, that’s my children. Yes, I have favorites among the essays. Julia Sweeney’s “Navigating Around the Dinner Table” is just perfect in so many ways. Psychologist Jean Mercer’s piece on moral development is brilliant and informative. Kendyl Gibbon’s “Dealing with Death in the Secular Family” is practical and so very well written. Kristan Lawson gives a cogent and clear capsule description of evolution for readers 12 and up. And (forgive me, Lord) I’m fond of one of my own called “Teaching Kids to Yawn at Counterfeit Wonder.”

The rest are simply terrible. I’m kidding—it’s frankly an amazing collection of gifted writers and thinkers. But those five are my favorites.

HM: Is there any discussion in the book about gay or lesbian parenting?

DM: I had an early discussion on that very point with several people. I’m a vocal supporter, but decided at last that it was off-topic. An important and current issue, but only tangentially related to parenting without religion. One of the challenges for me as an editor was keeping the book focused, and though four of the essays specifically mention gay rights or otherwise support acceptance of gays and lesbians, gay parenting as such ended up unaddressed.

HM: Outside the fact that religion isn’t being taught to children, are there any parts of the book you anticipate will provoke criticism?

DM: I can’t think of a thing. Oh wait, I just thought of several.

(1) Some people are concerned about the cover image—a parent’s hand pressed against a child’s. It is clearly intended to evoke prayer, but the fact that they are the hands of two different people suggests something new: that in the absence of the divine, we turn to each other, with mystery and meaning undiminished. The publisher chose it without my input, but then (after my initial heart attack) I quickly came to see it as brilliant, beautiful and evocative of multiple meanings. It will get people talking, that much is certain.

(2) Some readers may be put off by religious critiques in some of the pieces—all extremely mild, I can assure you, and nothing gratuitous. Okay, one gratuitous thing (let the hunt begin!). They need to get over it. Dawkins and Jillette, as you might expect, are somewhat uncompromising and unfiltered, but I would no more silence those intelligent voices than accuse the other end of the spectrum of being too soft.

(3) Some atheists may find the book too accommodating of religion, since it encourages religious literacy and co-existence, and includes the work of two Unitarian ministers (both humanists). I invite them to get over it as well. Religion in some form will always be with us. Our task should be to raise children who can co-exist with religion while insisting, as loudly as necessary, that people of religious faith make their practices less cancerous and more humane.

There will surely be other criticisms. Let me say here and now that they will all be wrong.

January 25, 2007
Friends of God: A Road Trip With Alexandra Pelosi
Next Post

January 26, 2007 Atheists on Nightline?
Browse Our Archives
What Are Your Thoughts?leave a comment