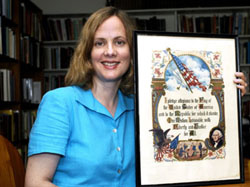 Annie Laurie Gaylor is the co-president of the Freedom From Religion Foundation (FFRF) as well as the editor of Freethought Today. She is also the author of several books, including Women Without Superstition: No Gods, No Masters

, a collection of writings by women freethinkers.

The Freedom From Religion Foundation was founded in 1978 by Annie Laurie’s mother, Anne Nicol Gaylor. FFRF has over 8,000 members and has been growing faster of late, likely due to its numerous (successful)lawsuits, including a pending case against the White House’s office of faith-based initiatives.

Ok, the “Black Collar Crime Blotter” section (containing submissions of priests’ crimes from the past month) in Freethought Today probably brings in some fans, too… 🙂

FFRF also puts together a great podcast. Go listen to it.

Annie Laurie was nice enough to answer a few of my questions:

Hemant Mehta: Were you raised without religion?

Annie Laurie Gaylor: I’m a third-generation freethinker on my mother’s side of the family, so I was fortunate. Religion was not forced upon us and we grew up without indoctrination, but of course no one in our society today can truly be free of religion. I remember being frightened by some religious TV programs I happened to catch (geared toward small children) and very ill at ease in the handful of Sunday school classes I attended at the request of my father’s religious family. My mother bought me a bible when I was in the 4th grade and I still remember how confused and disappointed I was when I sat down to try to read it. I gave up at the “begats” after a couple of chapters of Genesis. I didn’t read it until I was in college, and my notes for a women’s studies honors paper turned into the book, “Woe to the Women: The Bible Tells Me So

HM: If not, when did you realize you were an atheist?

ALG: Although all children are “born atheists” (without a knowledge or belief in theism), it does require more than just being raised without religion to become a thinking atheist or agnostic. I certainly understood the concepts very well by fifth grade, and was debating schoolfriends by sixth.

HM: Can you tell us about any hardships you’ve faced as a result of your atheism?

ALG: It’s an honor to work for a freethought group, so I mostly feel there are great and fascinating opportunities due to my atheist activism. Certainly like all atheists, I have been subjected to mundane snubs by unthinking people, the condescending “I’m praying for you” remarks, unwanted encounters with bibles in hotel rooms or even public hospital rooms, pushy religionists, etc. As a public atheist, I have received hateful, obscene, threatening mail and email inviting me to leave the country, and occasional death threats. When a printer refuses to print up an irreverent bumper sticker, for instance, that unexpected censorship and rudeness always stings, as do snide editorials against the Freedom From Religion Foundation. But overall I think even in the dummied-down America of today that the American public grants a level of respect to those who speak out sincerely for what they believe (or in our case, do not believe). The more people speak out in dissent of religion, the easier it becomes. But my views may be colored by living in Madison, Wis., still a “liberal oasis,” and the fact that in my job, I am paid to speak out for atheism!

HM: Can atheist groups work together with religious groups, and if yes, how so?

ALG: I think that atheist groups are considered so very notorious, controversial and radical that very few religious groups wish to be allied with them, if they have a common cause, for fear of being tarred by association. But as the number of nonreligious climbs in American culture, I think there will be greater acceptance. Certainly religious and nonreligious people can work together, and always have. I truly don’t care if my next-door neighbor is an Episcopalian and she does care that I’m an atheist. We talk about what we have in common and are friends. But then a conservative Roman Catholic actually moved from our block in part because she didn’t want to live close to [husband] Dan [Barker] and me! (That was fine by us – she was very hostile personally and wrote nasty letters to the editor always noting she was unfortunately our neighbor!)

HM: What would you like religious readers and leaders to know about atheists?

ALG: That we have an intellectually responsible position and should not be patronized, stereotyped or branded as immoral. All religious leaders and readers don’t necessarily do this, but if they let others do it routinely in print, in sermons, in private conversations and get away with it, without challenging and defending freethinkers, then they are part of the problem. It’s like the old days when someone would say they weren’t a racist because they didn’t tell racist jokes, but maybe they laughed or never spoke out against such derision. It’s time for religious leaders to turn off the bigotry and play nice.

HM: What type of work do you do as co-president of FFRF?

HM: What can we expect from FFRF in the future?

Do you have any questions you’d like to ask Annie Laurie?

Feel free to post them in the comments and we’ll try to do a follow-up soon!

January 4, 2007 Fundamentalist Threats
Browse Our Archives
What Are Your Thoughts?leave a comment